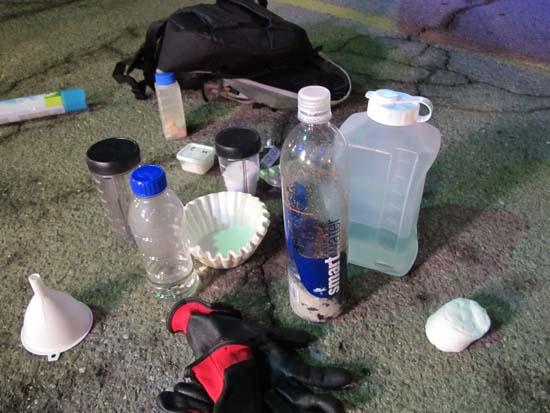 A Manchester man picked the wrong time to travel into Woodbury the night of Jan. 29.

That’s because he had the misfortune of encountering Cannon County Sheriff’s Detective Anthony Young.

At approximately 11:48 p.m. that night, Detective Young was traveling north on Highway 53 South when he got behind a green Honda Accord that was driving erratically. Det. Young observed the vehicle weaving all over the roadway in and out of lanes. Det. Young initiated a traffic stop near ACE Hardware on South McCrary St. and the vehicle pulled into the parking lot.

At this point Det. Young did a check of the driver’s license and it came back valid with no restrictions. He asked the driver to step out of the vehicle, and while the driver was doing so he was unsteady on his feet. The driver, when asked, said he had not had anything to drink or taken any drugs. Det. Young could smell a slight odor of marijuana coming from the vehicle. Although the driver stated there was nothing illegal in the vehicle, he would rather the detective not perform a search.

Det. Young contacted Sheriff Darrell Young, who in turned contacted Detective James Davis, handler of the department’s drug dog. He then told the driver, Adam Clint George, 100 New Union Heights, Manchester, that the drug dog was en route to the location. George told the detective that he did have some marijuana in his vehicle. He said it was in a compartment by the steering wheel of the vehicle. Upon further questioning, George also stated there was more marijuana in the vehicle in a backpack located on the passenger side.

George at first claimed the white power was crushed up diet pills, but later in the conversation admitted to Det. Young that it was meth.

Det. Young then had George perform a series of field sobriety tests. George was unable to perform them to the satisfaction of the detective. George was placed under arrest and transported to the county jail by Deputy Reed Bryson. Det. Young took an inventory of the evidence at the scene and then contacted the Meth Task Force to come dispose of the lab and the other components which were found. The vehicle was also seized and impounded at the sheriff’s department.

After that Det. Young went to the jail and transported George to the hospital to have blood drawn for testing for evidentiary purposes. Once back at the CCSD, Det. Young tested the white powder and the liquid in the syringes. They both came back positive for meth.

Print
Members Opinions:
tonysyler
[Delete]
That is so sad i new him...good guy but this story will only give him one rep but for those who know him should hope for best that he gets help he needs and comes out a better man for it good luck Adam :D!!!!!!!!1
[Delete]
Adam is a very kind and gentle person. I hate that he has made choices that led him to this place. I am praying that he gets the help he needs. He is too good of a person to end up in this situation.