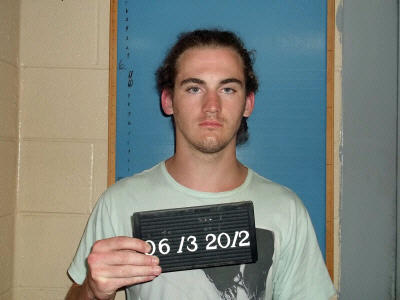 JUSTIN HUTCHINS
A young Bradyville man is facing DUI and drug possession charges after he was arrested last week outside a local market.

Justin Brad Hutchins, 18, of 145 Barker Rd., Bradyville, was observed stumbling into the side of the Quick Shop by Cannon County Sheriff's Deputy Brandon Gullett.

Deputy Gullett was sitting at the traffic light at Main and South McCrary when he noticed a white Chevrolet Silverado pull into the parking lot of the Quick Shop.

Deputy Gullett saw the driver attempt to step out of the vehicle and stumble. The driver, who was subsequently identified as Hutchins, continued to stumble as he went into the store.

Deputy Gullett turned around and came back before Hutchins got into his truck. The deputy noticed that Hutchins' eyes were bloodshot.

While Deputy Gullett was searching Hutchins, he found a small bag that contained a white powder believed to be Methamphetamine.

After he was placed in custody, Hutchins agreed to take field sobriety tests then later refused one of the tests.  Hutchins then agreed to submit to a blood alcohol test.

After transporting him to the Cannon County Jail, Deputy Gullett tested the white powder and it came back positive for Methamphetamine.

Hutchins was charged with DUI 1st Offense and Possession of Schedule II Controlled Substance.  Bond was set at $5,500. Initial court date is Aug. 7.