Deputies Recover Over $50,000 In Stolen Property 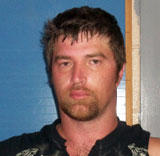 Sheriff's Investigator Anthony Young said officers went to that address, the residence of James Lee McPeak, after receiving information there might be stolen property at the location.

The deputies did in fact find property which had been reported stolen out of Rutherford County in December of last year, and also found an alleged meth-making operation.

"We went there looking for stolen property and while we were looking we found what appeared to be the components of a meth lab," Investigator Young said.

Items recovered included a custom special Chopper Motorcycle valued at approximately $45,000, a Polaris four-wheeler valued at over $5,000 and a Ruger rifle valued at $300. Investigator Young said the owners of the property were contacted and identified the items which belonged with them.

It's the second time in the last few months McPeak has been charged with theft. He allegedly stole a red 1994 Toyota pickup truck valued at approximately $3,000 from James Bishop of Morrison and was arrested on Aug. 25. He has a Nov. 8 court date on that charge.

Participating in the investigation and arrest in addition to Investigator Young were Sheriff Darrell Young, Chief Deputy Bruce Kirby, and deputies Brandon Gullett and Mike Smith.