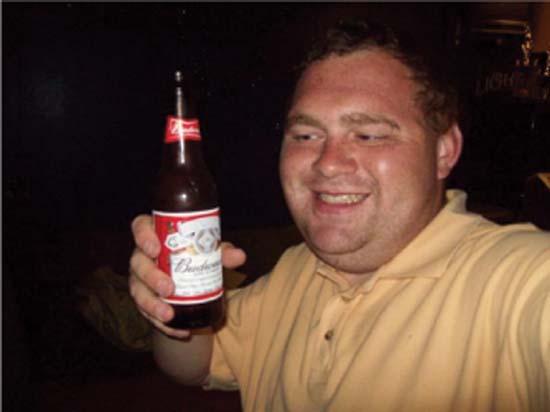 This photo from the personal MySpace page of former Cannon Co. Deputy Aaron Hillis show him holding a bottle of a popular brand of beer.
Two deputies from the Cannon County Sheriff’s Department were relieved of duty by Sheriff Billy Nichols this week.

On Wednesday (Dec. 9) Sheriff Nichols fired Deputy Greg Fauls for poor work performance and failure to conform to departmental requirements. Fauls had been a deputy since June 24, 2005.

Deputy Aaron Hillis resigned his position on Thursday. Hillis had been with the department since January 6, 2006. On Thursday, December 10, Hollis was served with an Order of Protection at 11 a.m. at the Jail following an incident which occurred on Friday, December 4 at a residence on Bradyville Road.

Fauls and an Auburntown Fire Department member (Eric Goode) were at the Hillis residence when the altercation occurred. Later in the evening Investigator Charlie Wilder, Lt. Brad Hall and Deputy Eric Moss responded to the residence to retrieve department equipment.

“That incident was between Deputy Hillis and his girlfriend, Sherry Morton. Hillis was actually paying the utilities and the deposit at the residence but he left when he and Morton got into a verbal argument,” said Sheriff Nichols.

"I regret losing these officers but I feel it is for the betterment of my department. I would also add that an account of the incident on another local news outlet is totally inaccurate and contains numerous incidents that did not occur.”

Sheriff Nichols added, “I welcome the Tennessee Bureau of Investigation or any other agency to come to my department. We have nothing to hide and will assist them in any investigation they want to conduct.”

The petition for the Order of Protection against Hillis was requested by Sherry (Sharon) Morton, who filed the following statement:

"On Dec. 4, 2009 I asked Aaron Hillis to leave my residence. I asked him through several phones calls prior to arriving at my residence at which time he was still there. Aaron kept saying, 'If I can't have you no one will.' At this point he grabbed my pants and I was dragging to get away from him. My friend Brittne Parker arrived around 3:30. A short while later I went into the bathroom and Brittne followed a few minutes later. Aaron Hillis was standing in front of the bathroom door with his service revolver in his hand pointing at me. He had been advised to have no contact with me or drive by my house in which he drove by my house Saturday and Sunday."

On Thursday Hillis apparently violated the order, and Morton made a Motion and Affidavit for Contempt for Ex-Parte in the case of Sherry Elise Morton vs. Aaron K. Hills:

The contempt motion was filed in Chancery Court. The order of protection is valid for 15 days. Hillis is scheduled to appear before Chancellor Robert Corlew on Dec. 21.

In her request for the protection order, Morton noted that Hillis was her ex-live in boyfriend. Morton affirmed she felt she was "in an immediate and present danger of abuse" from Hillis.

She requested that HIllis "be prohibited from owning, possessing, transporting or using a firearm or ammunition" and "for any relief that might be necessary to protect the safety" of Morton and her children.

Print
Members Opinions:
PurpleHaze
[Delete]
It is my opinion there is corruption at the CCSO. Who wrote this story? His new Grant writer and former owner of the Cannon Courier? Sounds like it.