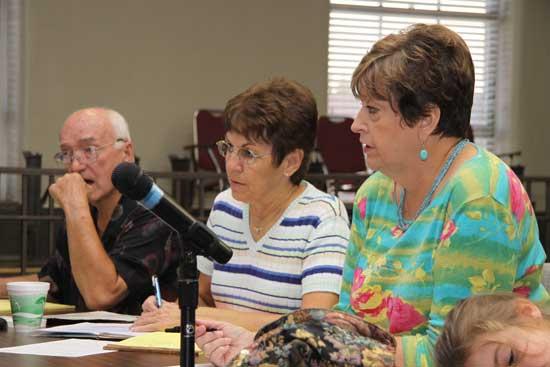 To rally support for candidates running in the state and national races, the local Democrats made plans for a number of upcoming events.

With Democrats trending behind Republicans in national polls, local party chairman Charlie Harrell said it was vital to make a strong push for Democrat candidates on the ballot.

"We need to push the person and not the party," Harrell said. "We have candidates that will draw strong support even from people who say they are Republican."

One of those candidates is McDonald, a farmer from Smith County who is a newcomer to politics. His opponent in the State Senate race, Beavers, is not very popular among area Democrats.

"McDonald is a fine man and will make a good Senator," Harrell said. "George is going to be a Stratton Bone, I think."

Bone, Harrell said, has been an excellent representative for Cannon County in the state legislature, helping bring millions of dollars in funding for projects even though the county is one of the smallest in the district and state.

"We have got to get Mae Beavers out and he (McDonald) is our only chance," Sue Patrick said.

Democrat political strategists are encouraging candidates to focus on local issues to try to overcome the frustration many voters are expressing about the party at the national level. Republicans agree, but counter that the federal government, currently under control of Democrats, is encroaching more on what they see as local matters.

Upcoming events being planned by Democrats in the weeks ahead include:

• A rally at the Cannon County Courthouse on Sept. 21 for Bone and McDonald, beginning at 5:30 p.m.

• A bean supper at either the Cannon County Senior Center or the Woodbury Lions Club building on Sept. 30 from 5 to 7 p.m. In addition to Bone and McDonald, organizers are hoping congressional candidate Carter can attend.

Harrell said he is also working on an event he hopes to stage at the Historic Readyville Mill in October that will feature former governor Ned Ray McWherter, father of Mike McWherter.

In addition, Bone and Tennessee Governor Phil Bredesen are hosting a Meet and Greet on Tuesday, Sept. 7, from 6:30 to 8:30 p.m. at the James E. Ward Agricultural Center in Lebanon to mark the official kickoff of Bone’s campaign for the Tennessee House of Representatives District 46.

There is no admission fee for the event, which will also include special guests, Mike  McWherter and  McDonald, along with Tennessee Commissioner of Agriculture Terry Oliver and former Ag Commissioner Ken Givens, who is now working with McWherter’s Campaign Team.

Another Democratic Party event planned for next week with feature former President Bill Clinton, who will attend a rally for McWherter on Thursday, Sept. 9 at the Hilton Nashville Downtown.