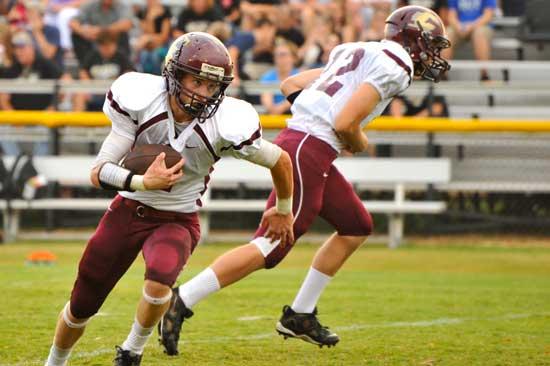 The Lions coughed up four turnovers (two interceptions, two fumbles) and showed little second-half resistance as the Tigers demoralized Cannon County 56-6 in front of a standing-room only crowd in Smithville.

Not only was Cannon County guilty of excessive turnovers for the second straight week, but it also was blameworthy of six 15-yard personal foul penalties, one of which wiped a brilliant defensive score from Justin Weaver off of the board.

By the time the dust had settled DeKalb County had manhandled the Lions on the way to the one-sided win that should not have been as bad as the score would indicate.

Cannon County (0-3, 0-1) trailed 28-6 following Brandon James' 27-yard touchdown run off left tackle with 9:23 remaining in the third quarter, but the Lions  proceeded to give up four touchdowns on 11 plays on DeKalb County's next four possessions as the game got out of reach.

With each touchdown scored by DeKalb County (3-0, 1-0), Cannon County's players seemed less and less interested  and allowed the hosts to seemingly score at will.

"DeKalb was the better team tonight, no question, but we made it pretty easy for them at times," said Weaver, one of three seniors on the Lions' roster, said. "You can't give up the big plays we allowed. You can't turn the ball over and give up scoring opportunities. We just didn't put forth the type of effort necessary to get a road win in district play. I know we are better than we showed tonight. We will get back to work and get ready for the next one. It's one district game and if we get things fixed we can still make progress and have some success. We just can't give up."

It seemed as though the Lions cashed in their chips in the second half against DeKalb County.

In a matter of minutes the game literally went from respectable to out of hand as the Tigers poured it on against the younger, more inexperienced Lions.

The Lions' offense, which racked up over 300 yards despite five turnovers in last week's loss against Grace Baptist, was limited to 175 yards; however, they cost themselves four opportunities with turnovers.

"We would move the ball and have chances to score and then we make mistakes, have penalties or turn the ball over and you can't do that and expect to win against a good football team, which DeKalb County is," said junior receiver Cody Petro, who had 57 yards in receptions and more than 125 all-purpose yards with two big kickoff returns, including a 45-yarder to open the game.

"I know we have the potential to be a much better team than we showed tonight. We have seven games left and we need to commit ourselves to doing what it takes to turn our season around. That starts next week with Westmoreland."

Cannon County was competitive throughout the first 2-1/2 quarters. The Lions' defense created three turnovers with Justin Tobin hauling in an interception in the end zone, Weaver making an outstanding acrobatic pick down the sideline and later scooping up a fumble and scooting 45 yards for an apparent defensive touchdown to start the third quarter before the touchdown was wiped off due to a 15-yard penalty for blocking in the back 20 yards away from the play.

The Lions' offense, however, was not able to turn the turnovers into points when it had a chance to make a difference in the first half.

DeKalb County led 7-0 after scoring on its first possession and the hosts were on the verge of extending the lead when Tobin turned in an interception at the goal line. Cannon County was driving and had the ball at the DeKalb 42 when it fumbled the ball away.

The Tigers took full advantage and used a 10-play, 59-yard drive to increase the advantage to 14-0 when Cody Puckett scored from 1 yard out with 1:02 remaining in the first quarter.

Cannon County came back and put together a 40 yard drive that moved the ball into Tiger territory before quarterback Ryan Jordan was sacked on a third-and-2 play that forced a punt.

Weaver curtailed the Tigers' bid to increase the lead when he made a dynamic over-the-shoulder interception along the far sideline to return possession to the Lions. Cannon County once again drove the ball into DeKalb County territory before the drive stalled late in the first half.

Trailing 14-0 at that point, Cannon County was still in the game; however, the Lions' defense gave up two touchdowns in the next four minutes as the Tigers stretched the lead.

DeKalb County converted third and fourth downs of 12 yards or more to score three of its four first-half touchdowns.

Weaver ignited the Lions' faithful with a 43-yard fumble return for a touchdown at the outset of the second half but it was called back due to a block in the back penalty. The Lions did score five plays later when James went off left tackle for a 27-yard touchdown to narrow the gap to 28-6. James finished with 63 yards on 18 carries to lead the Lions.

Seemingly in the game at that point, Cannon County's defense let up and DeKalb County scored at will to pull away down the stretch.

The Lions will look to pick up their first win of the season against Westmoreland at Cannon County Friday. Kickoff is 7 p.m.

Print
Members Opinions:
blazer
[Delete]
Where is this great team that we read about a few weeks ago?
[Delete]
I will say our offense has improved since game 1, however our defense keeps making the same mistakes. Why? maybe because our team is young consisting mainly of sophomores and freshmen? maybe our man coaching the defense needs training? maybe he needs to go? maybe our players need to be lifted up instead of put down? maybe use different players, when the defense was spiraling downward, I saw no adjustments or substitutions? If you use the same ingredients with the same receipe, you will get the same product. Looks like we have a whole sideline full of players who would like to have their chance to help? On a positive note, Cannon County has the largest crowd of fans and I hope that continues and hope the Lions continue to work hard and know that their fans are behind them 100% regardless of what the scoreboard says. We have a young team, so all hopes are that they continue to strive to play their best and it will pay off in the next couple of years. GO LIONS!
RTLEHEW01
[Delete]
amen!
joedog
[Delete]
I think its time for the school admin. to rethink the coaching situation and go in a different direction. Two bad losing years does not look good for the players or the school,no wonder we only have 3 seniors and 5 jr's
jwood
[Delete]
We do have a great crowd of fans each week at the games. And I am so very glad for that, what I would like to start seeing is more fans on their feet cheering our team on. Week after week the same group of fans are leaving the games without a voice from all the cheering they are doing. Would it not be great for our team to see the WHOLE bleacher section on there feet cheering, and I don't mean just when they are making good plays and moving the ball. I mean the whole entire game. When you come to the game don't sit and socialize, STAND UP AND SUPPORT THE LIONS!!! WE ARE CANNON, and Proud of it!!!!!