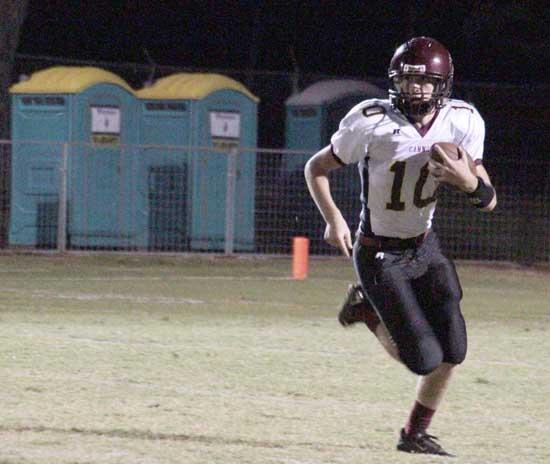 Heath Simons takes off on a run against York Friday. (CANDICE JONES photos)
JAMESTOWN - Cannon County's football team is having difficulty putting it all together.

On a night when the Lions exhibited their best overall defensive performance of the season and scored on special teams, the offense never got untracked and Cannon County had four turnovers in a 33-12 District 8-AA setback at York.

Defensive breakdowns were generally the culprit in earlier setbacks but the stop squad gave the Lions (0-5, 0-2) a chance against the Dragons (3-2, 2-0), who won their third straight and remained perfect in the league race.

Quarterback Heath Simons provided the Lions an early 6-0 lead with his 2-yard scamper into the end zone, and Damon Collette wowed the crowd with an electrifying 80-yard punt return for a touchdown with 17 seconds remaining in the first half to pull Cannon County to within 14-12 at intermission.

"We played a very good first half, a solid 24 minutes for the most part," Cannon County Head Coach Joel Schrenk said. "But we didn't finish it with a strong second half. We have to put a four quarters together and we have not been able to do that, yet, but we started much better and now the goal is to go back and put four of those quarters together."

Cannon County's defense had two fumble recoveries, one from Zach Osborne and another from Collette but those were off-set by the four the Lions gave away. Worse, turnovers were the only the only source for York's offense in the first half.

Osborne's fumble recovery midway through the first quarter set Cannon County's offense in motion at the Dragon 31. Simons immediately rifled an 18-yard completion to Brandon James to move the Lions to the 13. Tailback Gabriel Walkup had four straight carried before Simons scrambled to paydirt from the 2. His run provided Cannon County a 6-0 lead with 3:50 remaining. The extra point attempt failed.

The Lions defense forced a three-and-out but on a third-down play, Simons was intercepted by Tyler Huddleston, who returned the errant pass 30 yards for a touchdown. The extra point provided the Dragons a 7-6 lead. Disaster struck on the next play when James was hit and fumbled the kickoff after a 26-yard return. York regained possession and scored nine plays later to increase the lead to 14-6.

Collette capped the half with an impressive 80-yard punt return, eluding three tacklers initially and then racing 65 yards untouched down the sideline. The 2-point conversion failed but Cannon County had closed to within 14-12 and carried momentum into the half, or so it seemed.

"If not for those two turnovers in the first half it could have been a different story," Schrenk said. "The defense was playing well, getting turnovers, forcing three-and-outs, but they scored on an interception and then we turn around and give it right back to them on the kickoff and they score. That was it in the first half."

The second half was a different story.

Cannon County's defense couldn't get off the field and its offense sputtered. York's defense shut down the Lions ground attack as it limited Walkup to a season-low eight yards and the Lions to just 29 as a team. Cannon County managed just 73 yards total offense, including 12 in the second half.

"They did a good job stopping the run," Schrenk said of York's defense, adding, " but we couldn't really get anything going and we turned it over four times (three on offense, on on special teams). You aren't going to beat many people when you turn it over four times."

The Dragons opened the second half with a 10-play, 65-yard drive that culiminated with a 10-yard touchdown pass from Tyler Stephens to Jonrick Bishop on a fourth-and-5 call. The touchdown extended the lead to 20-12, and the Dragons converted another clutch fourth-down play on their next drive that Stephens capped with a 6-yard run to push the margin to 26-13 early in the fourth quarter.

York's third interception of the game set up their final touchdown late in the fourth quarter.

The Lions return home to play MTCS Friday at 7 p.m.

Print
Members Opinions:
joedog
[Delete]
People dont get down on these boys they are playing hard through some tough times.