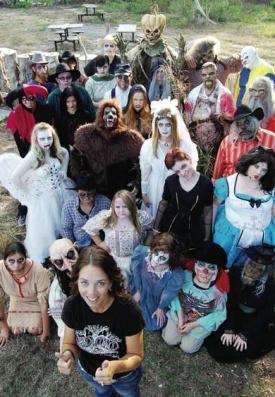 Dana Chapman of Lascassas, foreground, serves as the mad monster maker behind this motley crew of creatures of the night who do their best to raise the hair on the back of the neck of those who brave Dead Land Haunted Woods. (Photo by Ken Beck)
Raring for a scaring? Dealing for a chilling?

Mad monster maker Dana Chapman can satisfy your desire for a night of fright with a tour of her Dead Land Haunted Woods, a Halloween-themed attraction that lies off Highway 231 between Lebanon and Murfreesboro.

Last year’s edition of Dead Land attracted 9,000 souls seeking to have the daylights scared out of them. For this spooking season the mistress of the macabre has added another eerie trail and doubled the number of bizarro citizens that inhabit her forest of fear from 40 to fourscore (80).

“We’ve got twice the actors and twice the trail,” says Chapman, who lived in Wilson County for 20 years before moving to Lascassas in Rutherford County last year.

“We have a whole new trail called The Portal, where anything goes as far as monsters and frights. And we have The Curse, the original trail that goes with the Dead Land story.”

Each path winds through the forest for three-quarters of a mile and takes about 30 minutes if you walk (some can’t help but run). The site features tunnels filled with snakes and spiders, a hearse, a cemetery, an open grave and other frights too numerous to mention, much less spoil the fun.

Among the horrifying creatures hikers may encounter along the weird and wooly way are the Pumpkin Man, werewolves, the Butcher, a troll, hags, a scarecrow, a Confederate zombie, the Grim Reaper, white-winged vampires and Murderoni (don’t ask).

The majority of the scare actors hail from Wilson County as about 50 of the cast reside in Lebanon, Mt. Juliet, Watertown and Norene. Another 30 or so come a haunting from Murfreesboro, while Woodbury in Cannon County donated three spine-tingling thespians.

This year four families signed on as Dead Land actors giving a whole new meaning to the term “the family that preys together.” These includes a mom and pop and their two kids, a mother-and-daughter combo and two father-daughter duos.

Chapman sums up her spooktacular site as “a family-owned and operated haunted attraction that is in a real haunted woods.” She says it best suits those ages 9 and older.

“Our visitors tell us they love it. Dead Land is very different from the typical haunted attraction because most places set it in a house, and very few places set it outside completely,” Chapman said.

Besides getting their pants scared off, visitors can take their pictures with their ghoul friends. There is also a communal bonfire — not for burning witches — for roasting marshmallows and hot dogs.

“People love to sit around the bonfire with their friends and roast hot dogs and marshmallows before they go on to the next trail,” said the hostess with the ghostess.

Dead Land Haunted Woods offers brave souls looking for a scary trail their choice of two hikes, each three-quarters of a mile long.

Hours are 7 p.m.-midnight every Friday and Saturday now through Oct. 29.

Admission is $15 per trail or $25 for both. Located about 16 miles north of Murfreesboro on Highway 231 (7040 Murfreesboro Road), Dead Lead Haunted Woods is not recommended for children under the age of 9. Guests should wear proper running shoes (no flip-flops).