Day before Christmas, a battle begins 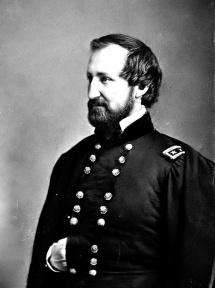 
One day after Christmas 1862, the Federal Army of the Cumberland moved out of Nashville with the intent of attacking the Confederate Army of Tennessee near Murfreesboro.

The U.S. troops were under the command of Maj. Gen. William S. Rosecrans. An engineer, Rosecrans was better at organizing than committing troops to battle. While attending West Point where he graduated fifth in his class, Rosecrans roomed with James Longstreet, who, after a stint with the Army of Tennessee, was to become one of Robert E. Lee's lieutenants.

Rosecrans' predecessor, William Buell, had been pulled from command because of his failure to pursue Confederates under the command of Gen. Braxton Bragg after the battle of Perrysville in Kentucky. Rosecrans relieved him of duty on Nov. 11.

It didn't take Rosecrans long to cause General-In-Chief Henry W. Halleck and President Lincoln to lose patience after nearly two months of reorganization.

"If you remain one more week in Nashville, I cannot prevent your removal, "Halleck telegraphed Rosecrans.

"I need no other stimulus to make me do my duty than the knowledge of what it is. To threats of removal or the like I must be permitted to say that I am insensible," Rosecrans replied hotly.

Rosecrans' reluctance was understandable in many ways. Both the Union and Confederate armies thought they had settled in for winter following the Two Rivers Campaign and the Battle of Perryville. Both armies had just reorganized, and while "Old Rosey" was beloved by his troops, Bragg was not. There was even a serious division among the Confederate commander's general officers.

Bragg's soldiers, as historian Stanley Horn wrote, had marched a 1,000 miles, fought a bloody battle, and were now back where they started two months before.

His subordinate, Gen. Kirby Smith, sought and received release from Bragg's command. Bragg had traveled by rail to Richmond to explain his failed invasion of Kentucky to President Jefferson Davis. Bragg blamed the loss on the fighting Bishop, Gen. Leonidas Polk, who was subsequently called to Richmond as well.

It wasn't until Nov. 26, a month before the Battle of Stones River, until Bragg's army was complete and officially dubbed the Army of Tennessee.

Bragg spread his army out in a semi-circle to watch for a Federal approach from several different directions.

Bragg's headquarters was in Murfreesboro with the center of his army under Polk's command. His left flank was stationed near Eagleville and Triune under command of Gen. William Hardee. His right flank was at Readyville under the command of Gen. John McCown.

Confederate picket lines extended within two miles of Union lines near Nashville. Cavalry under the command of Maj. Gen. Joseph Wheeler patrolled the area between the pickets and the main lines.

On Dec. 7, 1862, Brig. Gen. John Hunt Morgan launched his successful raid at Hartsville. On Dec. 21, Morgan launched another raid into Kentucky. His troops would not be available for the Battle of Stones River.

Similarly, Brig. Gen. Nathan Bedford Forrest launched a Dec. 11 raid into West Tennessee in an attempt to check Gen. U.S. Grant's advance into Mississippi. Forrest would not return to Middle Tennessee until Jan. 5.

It was an ideal time for a Federal attack. The Union desperately needed a win, especially after Fredericksburg on Dec. 13, 1862. The Federal Army of the Potomac sustained massive casualties in a series of frontal assaults against the entrenched Army of Northern Virginia led by Gen. Robert E. Lee.

Fredericksburg was one of the most lopsided battles of the Civil War and was very demoralizing for the Union cause in the terms of national morale.

But it was an act by President Davis that prompted the Union army to finally move.

Davis, during his visit to Murfreesboro, ordered that Gen. C.L. Stevenson and his division of 10,000 men be dispatched south to help Pemberton in Mississippi. Word of that move seeped to Federal headquarters in Nashville and played a role in the decision to advance.

On Dec. 26, the Federal Army of the Cumberland began its advance.

As the Army of the Cumberland moved, Brig. Gen. Joseph Wheeler's cavalry began a series of assaults designed to slow the Union advance, allowing Bragg to pull his forces into a tight line of battle outside Murfreesboro.

A relative youngster, Wheeler was only 26 when placed in command of the Army of Tennessee's cavalry. Both Forrest and Morgan were his subordinates.

Wheeler led his cavalry completely around the Union army engaging two of Thomas's brigades, in the process.

During the night of the Dec. 29, Wheeler, who had moved from the left to the right of Murfreesboro, advancing by the Lebanon and Jefferson Pikes, gained the rear of Rosecrans's army and attacked Starkweather's brigade at Jefferson, at daylight Dec. 30.

From Jefferson, Wheeler proceeded toward La Vergne, picking up stragglers and a small forage train, and arrived at La Vergne about noon that same day. There he captured the immense supply trains of McCook's corps. About 700 prisoners were taken and a million dollars worth of property seized or destroyed.

"Early on the morning of the 31st Colonel M. B. Walker's Union brigade (of Fry's division Thomas's corps), on its night march from Nolensville to Stewartsboro, arrived within two and a half miles of La Vergne, and advanced at once to the scene of devastation. The turnpike, as far as the eye could reach, was filled with burning wagons. The country was over spread with disarmed men, broken-down horses and mules. The streets were covered with empty valises and trunks, knapsacks, broken guns, and all the indescribable debris of a captured and rifled army train," wrote Lt. Col. G.C. Kniffin of Crittenden's staff.

"At 2 o'clock on the morning of the 31st Wheeler came up bright and smiling upon the left flank of the Confederate army in front of Murfreesboro, having made the entire circuit of Rosecrans's army in 48 hours, leaving miles of road strewn with burning wagons and army supplies, remounting a portion of his cavalry, and bringing back to camp a sufficient number of minie-rifles and accouterments to arm a brigade," Kniffin reported.

By the evening of Dec. 30, Rosecrans had his army in position facing the Confederates. They slept fitfully on the cold ground soaked by a cold rain. A great battle would begin tomorrow.