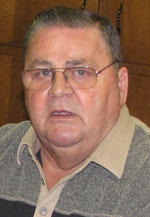 Davenport, who has held the elected position for over three decades, informed Cannon County Executive Mike Gannon by letter on Dec. 2 that he would be stepping down from his post effective January 15, 2010.

Davenport wrote in his letter to Gannon:

"I, Robert H. Davenport, announce that effective January 15, 2010 I will retire as Circuit Court Clerk of Cannon County. I would like to begin by thanking the people of Cannon County for electing me to this position for the past 32 years.

"I have enjoyed this job and serving the people. I have constantly strived to represent this County well and have always been dedicated to helping everyone who has walked through the door of my office to the best of my ability.

"Additionally, I would like to thank my staff, Lynne Foster, Katina George, Judy Foster and Nathan Nichols. They work very hard for the people of Cannon County and I will miss them.

"With me throughout my career has been Lynne Foster. She has been the backbone of my office and is the very definition of a loyal and hard-working public servant.

"In filing the vacancy created by my resignation, I would like to request that the County Commission appoint Lynne to serve in my place until the August 2010 General Election. Lynne has the full support of the staff in the Circuit Court Clerk's Office and brings with her the experience and leadership skills necessary to effectively serve the people of Cannon County.

"Again, I would like to thank the people of Cannon County for the faith they have put in me over the past years. I will take with me some fond memories of my time in office."

The Cannon County Commission will appoint a person to serve in the position until the election at its meeting on Jan. 16.

Next year's General Election will be on Aug. 5. Candidates seeking positions in county government can begin picking up qualifying petitions Jan. 4 at the Election Comission Office. The deadline for turning them in is April 1 at noon.