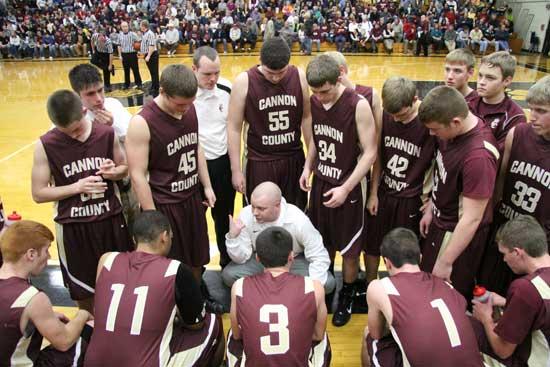 Cannon County third-year Head Coach Matt Rigsby was unanimously selected as the District 8-AA Boys Coach of the Year this week after guiding the Lions to one of their best seasons in more than a decade.
Justin Davenport is driven by the desire to be the best.

His play on the hardwood this season has District 8-AA coaches convinced he is the best - at least in their league.

Davenport, a senior point guard, was named District 8-AA Boys Player of the Year in a unanimous vote of league coaches Monday after leading the Lions (20-10) to their first 20-win season in over a decade, a second-place finish in the league standings and automatic berth into the Region 4-AA Tournament. He is the first Lions player to earn the honor since Spencer Rowland in 2002.

Davenport was joined on the All-District 8-AA First Team by Jared Nave. Colin Jones and Cody Ruehlen were third team and Brian Cripps was honorable mention.

"We are a special group and have a lot of good players," Davenport said. "To have five on the All-District teams proves that. I'm proud of our team, but we still have a lot left to accomplish this season."

Cannon County third-year Head Coach Matt Rigsby, also a point guard as an All-District selection during his prep playing days for the Lions, was the unanimous choice as District 8-AA Coach of the Year.

Cannon County's win total and district standing has increased in each of Rigsby's three years leading his alma mater, including back-to-back Region 4-AA berths for the first time since the 2001-02, 02-03 seasons. This year's 20-win campaign is the first since 1998-99.

"It is always nice to be recognized by your peers," Rigsby said. "I'm very appreciative of this but if our team was not good I wouldn't be honored like this. These guys have taken coaching, worked hard and done everything asked of them. The diligence and work ethic of players such is these is why coaches get these awards, and I also have good assistant coaches (Jonathan Odon, Matt Cagle)."

Fueled by passion and driven with desire, Davenport is in the midst of one of the most outstanding seasons ever produced by a Cannon County boys basketball player. Already the all-time leading scorer in program history with more than 1,700 points, Davenport is averaging 23.2 points and 4.1 assists per game.

"I'm very proud of this honor for Justin," Rigsby said. "He's worked hard to reach his potential. There are reasons why things like this come to you. Justin is a worker. He would text me on a random night at 9 wanting me to come open the gym so he could work on his game. He has put in a lot of hours and hard work that people don't see."

District 8-AA coaches saw Davenport's potential when they voted him Freshman of the Year and third-team All-District in 2007-08.  His dogged work ethic proved them prophetic by improving his game each season and producing the best all-around effort during a dynamic senior season.

More importantly, Davenport's play has aided in restoring pride to the Lions program.

Davenport has scored 20-plus points in 20 or more games this season, including 25-or more in nine. He has scored 32 or more four times and 40 once. His five games of 32 or more have come in the last six games during a critical stretch drive. More impressive, Davenport is shooting 59 percent during this offensive uprising.

"I'm just shooting the ball well and taking good shots," Davenport said. "I believe the biggest thing is that I'm doing a better job of not forcing things and letting the game come to me. Shot selection has been big. I just try to be a playmaker and do whatever it takes to win, whether that's scoring, passing, whatever the team needs me to do."

Davenport will lead the Lions into the District 8-AA Tournament against either Upperman or York at White County High School Saturday at 5:30 p.m.