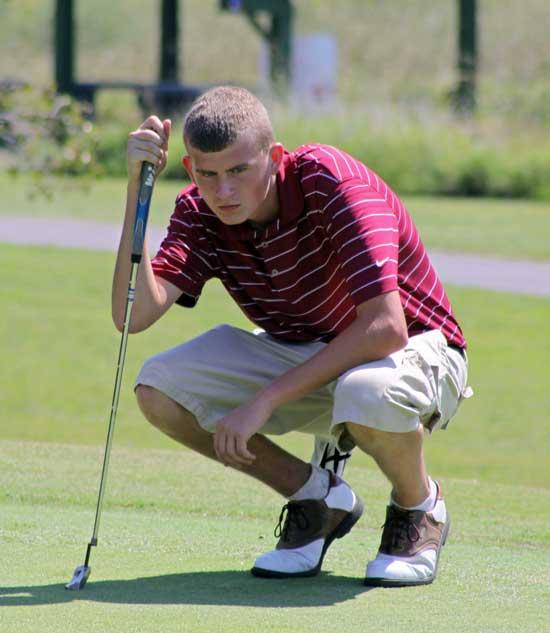 The Cannon County senior played well enough to earn a berth in the Region 4 A-AA Tournament for the second straight year, but Davenport's jubilation was tabled when the final team results were posted.

After putting together a strong 9-3 ledger during the regular season, Cannon County's team fell one stroke short of advancing into the Region Tournament for the first time in school history. It was as close as the Lions have ever come to advancing out of the District 8 A-AA Tournament.

"I just go back and think that if I could just change one little thing it could have made the difference," Davenport said. "I guess everyone on the team thinks the same way when you fall one stroke short. It is as close as we have come and that makes you feel good about the progress of our program and how well we did this season but you still want to (advance), especially when it's just one stroke."

Cannon County finished fourth with a 357, one shot behind third-place Jackson County (356). DeKalb County won the district title with a 322 and Livingston Academy was second with a 329. The top three teams and the top five individuals not on one of those teams earn a spot in the Region Tournament.

While DeKalb County and Livingston Academy outdistanced the field, the battle for the final advancing spot was hotly-contested with Jackson County, Cannon County and Friendship Christian separated by two shots.

"The team did really well this year and the players have played better as the season has gone along so I expected them to play well in the tournament," Cannon County Head Coach Ronnie Burks said. "I knew it was going to be a real tough competition between the three teams that qualified. I thought we had a shot if the kids played real well. I was pleased with what they did but disappointed that we came up one stroke short."

Not only did the team fall one shot short of advancing, but senior Josh Goff also was on the brink of advancing as an individual only to finish one stroke behind Upperman's Sam Cass for the fifth and final region berth. Goff finished with an 87.

"With golf that's the way it is. One stroke here or there can cost you qualifying for a spot in the region and it got us today," Burks said.

Even though the performance was not one of Davenport's best of the season it was still good enough to earn him a spot in the Region 4 A-AA Tournament and keep alive his hopes of reaching the TSSAA State Championship.

The mentally-tough Davenport got off to a slow start with a 9-over 45 on the front nine, but he showed great discipline and grit while battling through the back. He ended up with a 3-over 39 to reach the region tournament for a second straight year.

"It feels good (to get back to the Region), but I could have played much better," Davenport said. "I'm in (the region) so I'm going to forget about this, put it behind me and move on. Now you have more time to practice and get better."

Davenport said putting was a weakness during the district tournament.

"The greens were really fast and that kind of killed me," Davenport said. "I had five 3-putts. If you take those five strokes off you have a much better score. It was really just putting for me."

Like Davenport, Cannon County's team rallied on the back to give it a chance to make a run at one of the top three spots. Four players improved their score on the back nine and the other was 3-over. Davenport improved by six strokes and Ruehlen showed a five-shot turnaround.

Unfortunately, for the Lions, the strong rally came up one shot short of forcing a playoff for the third region team berth.

Davenport will look to become the second golfer in Cannon County history to advance to the TSSAA A-AA Golf Tournament when he plays in the Region 4 A-AA Championship, Sept. 27.