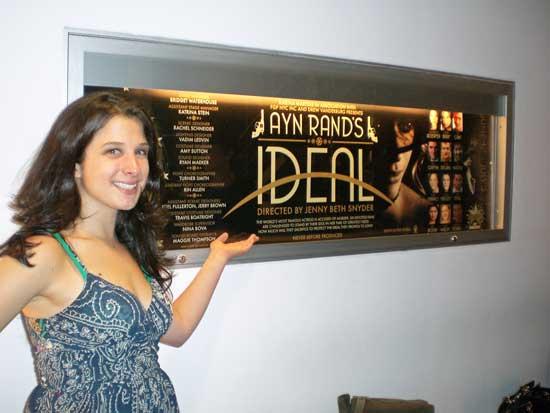 Jenny Beth Snyder, the daughter of Cannon County native Melinda Snyder, is directing a play in New York City.
A play written by one of America's most prolific and provocative authors opened its New York premier on Thursday June 17, more than 75 years after it was penned. Ayn Rand’s Ideal is the story of the world's most famous actress who, when accused of murder, offers a challenge to six devoted fans to unwaveringly stand by her in her time of greatest need.

Rand asks the underlying question "How much will they sacrifice to protect the ideal they profess to love?" Against the backdrop of fame and murder Ideal explores the willingness of people to betray their highest values and principles and at what cost they are willing to pay for affection.

Jenny Beth Snyder, the show’s director says that “in the end, Ideal, is a call to believe. Ayn Rand’s leading lady, Kay Gonda, looks in the face of all who claim to be her followers, and exposes their hearts’ true intentions. In her conversations with the fans, Gonda see’s what they actually hold as their “Ideal”, and the truth is heartbreaking for her. I think today's world is thinking the same thing. Pure motives don't seem as pure anymore, and the way we've been doing things is no longer working. Apathy is an anthem, and hopelessness or false hope is the fuel we live by. And that is why Ideal, though 75 years old, still speaks to us today.”

Jenny Beth graduated from NYU's Tisch School of the Arts in 2008 and received her BFA from Playwright's Horizon Theater School. Snyder is co-founder of Fresh Ground Pepper NYC (the producers of Ideal and a new and innovative theater production company) and has directed ten full length plays in New York including The Last Days of Judas Iscariot, Witness and Wednesdays.

Snyder adds, “I found Ideal when browsing through a collection works and plays in a local bookstore. After I read the piece I realized that even though it was 75-years old, the themes of standing up for what you truly believe in and being true to yourself resonated on. I believe that in Ideal, the audience is forced to stand up, be counted, and ask themselves, what do we do when even our ideals get lost?” is a call to believe, a call for people who refuse to give up.

Playwright Ayn Rand is best known as the author of best-selling Atlas Shrugged and The Fountainhead and as the founder of a philosophical system called “objectivism.” Objectivism emphasizes individual rights, small government, and is fiercely opposed to socialism and the welfare state. Atlas Shrugged has sold more than six million copies since being published in 1957.

In this New York premier production, the leading role of actress Kay Gonda is played by Jessie Barr. She leads an ensemble cast of 12 players, most of whom play multiple parts in this 25 role script. NYU alumnus Jenny Beth Snyder is director and brings Ideal to life as part of America's Off-Broadway Festival at 59e59th street Theater in New York.

Fresh Ground Pepper NYC offers a monthly performance series created for the development of new ideas, where artists of all mediums can bring new work into a performance space to experiment, feedback, collaborate, and grow their pieces with other artists.

The Drama Desk Award-winning 59E59 Theaters is the number one Off Broadway destination in New York City and is a spectacular modern theater complex with three stages and a lively bar on the mezzanine level.