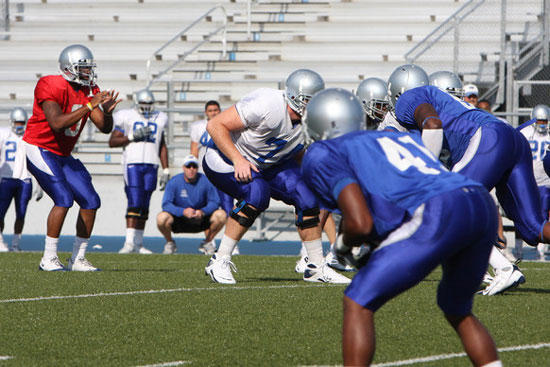 Middle Tennessee held its final scrimmage of the preseason Saturday. The Blue Raiders open the season Sept. 5 at Clemson.
MURFREESBORO - Quarterback Dwight Dasher has had an impressive fall camp and it showed in Middle Tennessee's final full contact scrimmage on Saturday at Floyd Stadium. The junior completed 11 of 17 passes for 185 yards and two touchdowns in the 105-play scrimmage.

Overall, it was an impressive day for the offense as they racked up seven touchdowns and two field goals and committed just one turnover.

"I was pleased with the scrimmage today," said Head Coach Rick Stockstill. "We held some guys out and played some of our younger players at a lot of positions. But, I was very pleased with their effort and like I have said before I like the attitude of our team.

"Offensively, we corrected some mistakes from the first scrimmage, finished drives better, and the offensive line stepped up. Defensively, I thought we did alright playing as many young guys as we did. I liked the way they competed. It is a fun group to coach."

Dasher and company struck quickly on the opening possession by reaching pay dirt in just five plays and covering 70 yards. After a 2-yard loss by running back D.D. Kyles, Dasher hit Desmond Gee for 18 yards and then found Sancho McDonald for 14 yards. Kyles added a 6-yard run before Dasher hit Patrick Honeycutt over the middle for a 34-yard touchdown.

"It's a really good note to end the week on," said Dasher. "Personally, I thought I made a lot of progress today but I also believe our entire offense was improved. The offensive line provided great protection, the receivers made nice plays, and the backs ran hard. We are all feeling more comfortable."

Backup Brent Burnette, who was 9-for-13 for 39 yards, then guided the offense on a 15-play drive that ended with a 45-yard field goal by Alan Gendreau. After a 16-yard run by Benjamin Cunningham, Burnette ran two yards on 4th-and-1 to keep the drive alive. Sacks by Kendall Dangerfield and Chris McCoy stalled the drive and made the offense settle for a field goal.

Dasher took the reins once again and had the same result. A 15-yard completion to Honeycutt got the drive going but the key play was a 27-yard strike to receiver Shane Blissard that setup Dasher's second touchdown pass of the day. On 3rd-and-15, Dasher threw a strike to Wes Caldwell for an 18-yard score.

The defense then held the offense scoreless for five straight possessions. Defensive end Jamari Lattimore recorded a sack to end one drive then a tipped pass was intercepted by safety Denzell Guerra to stop another. A couple of TFLs ended a third chance before freshman Omar McClendon forced a punt with a sack on the fourth drive.

The offense completed their scoring on the afternoon with touchdown runs from Dasher, Burnette, Nicholas Coleman, Kyles, and Jamal Ramsey.

Defensively, the Blue Raiders collected 12 tackles for loss and six sacks to go with one interception.

"We still have a long way to go," added Stockstill. "We are not there, but we are closer this Saturday than we were last Saturday. I think we are getting closer everyday. Our coaches are doing a great job coaching and our players are responding very well. They are tired physically and mentally, having gone 17 straight days of practice. We will take tomorrow off and give them some rest before coming back Monday and going again."

The Blue Raiders open the season on Sept. 5 at Clemson. Kickoff is scheduled for 5 PM CST.