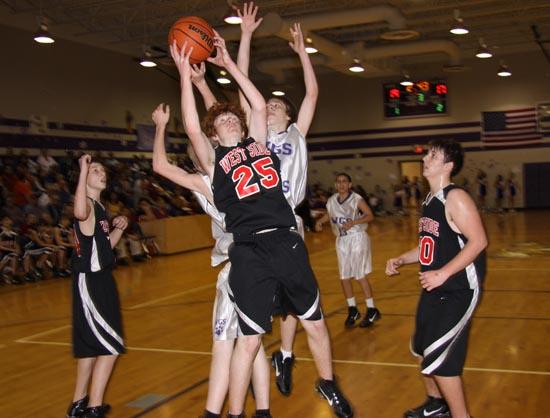 The Westside Eagles and the Woodbury Cubs game was the closest contest of the day.
The final rounds of the 2010 Cannon County Elementary Basketball Tournament were held at Woodbury Grammar School Saturday.

In the girl's consolation game Woodbury Grammar defeated the Short Mountain Lady Bears 44-32. WGS leading scorers were Walkup, Sissom, and Hayes. Macy Williams played a huge part in the Bears' offense and defense. WGS Coach Felicia Walkup said "the girls have worked really hard this season, we all have."

The Auburn Knights dominated the Woodland Warriors in the boys consolation game with a final score of 53-34. Garret McReynolds, Tanner Russell, and Corey Hailey each distinguished themselves as valuable assets to the Knights' game.

The girl's final seemed destined for gridlock from the beginning -- when a full five minutes passed before either the Auburn Lady Knights or the Woodland Lady Warriors scored a basket. Once the Warriors were fully warmed up they established and quickly widened the score gap, eventually defeating the Lady Knights 39-11 which gave them an undefeated season in the County.

"We've worked really hard all season," Warrior Coach Suzette Sissom explained, "we're lucky to have this group of six 8th graders who have been playing together for years." Let's hope some of these girls decide to continue playing next year at CCHS.

The last game of the afternoon was a nail-biter. The Woodbury Cubs and the Westside Eagles wrestled up and down the court and neither team was ever at a clear advantage.

Eagles' Coach Roger Hailey forecast the close contest before the game, "the top boys teams in the County are all dead even... it's all going to come down to who has the best night," he said. When the fourth period began with a score of 22-22, Hailey might have felt a chill. As the scoreboard counted down the last few seconds of a single-point game he must have gotten frostbite.

The Woodbury Cubs held their lead as those last few seconds ticked by in a flurry of fumbled fouls -- each player who took one was undoubtedly under incredible pressure and not one shot connected. The score remained 29-28 as the buzzer rang and half the gymnasium erupted with cheer.