Crystal Meth: Many Die From Its Grip 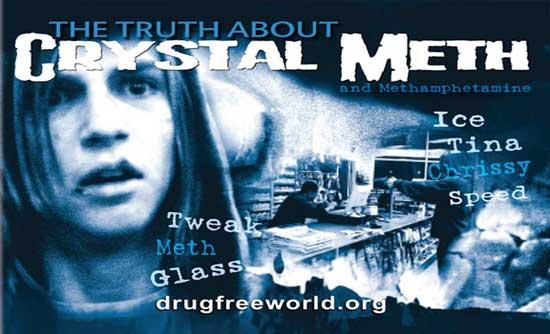 Crystal meth is short for crystal methamphetamine. It is just one form of the drug methamphetamine. Actually Methamphetamine is an illegal drug in the same class as cocaine and other powerful street drugs. It has many nick names — meth, crank, chalk or speed being the most common.

Methamphetamine is a white crystalline drug that people take by snorting it (inhaling through the nose), smoking it or injecting it with a needle. Some even take it orally, but all develop a strong desire to continue using it because the drug creates a false sense of happiness and well-being — a rush (strong feeling) of confidence, hyper activeness and energy. One also experiences decreased appetite. These drug effects generally last from six to eight hours, but can last up to 24 hours.

The first experience might involve some pleasure, but from the start, methamphetamine begins to destroy the user's life.

Crystal meth is used by individuals of all ages, but is most commonly used as "club drug," taken while partying in night clubs or at rave parties. Its most common street names are ice or glass.

It is a dangerous and potent chemical, and as with all drugs, a poison that first acts as a stimulant but then begins to systematically destroy the body. Thus it is associated with serious health conditions, including memory loss, aggression, psychotic behavior and potential heart and brain damage.

Highly addictive, meth burns up the body's resources, creating a devastating dependence that can only be relieved by taking more of the drug.

Crystal meth's effect is highly concentrated, and many users report getting hooked (addicted) from the first time they use it.

"I tried it once and boom! I was addicted," said one meth addict who lost his family, friends, his profession as a musician and ended up homeless.

Consequently, it is one of the hardest drug addictions to treat and many die in its grip.

Why are we giving you this information? Well I found out on the internet that our state, Tennessee is the queen state of crystal meth in USA, so something needs to be done about it and the only way we will lower the demand on any drugs will be by educating people about it. There is a lot of talk about drugs in the world — on the streets, at school, on the internet and TV. Some of it is true, some not.

Much of what you hear about drugs actually comes from those selling them, Reformed drug dealers have confessed they would have said anything to get others to buy drugs.

Don't be fooled. You need facts to avoid becoming hooked on drugs and to help your friends stay off them. That is why we wrote that for you.

Your feedback is important to us, so we look forward to hearing from you. You can reach me Anne Vallieres on my phone at 615-563-4292 or you can visit the foundation on the web at www.drugfreeworld.org.