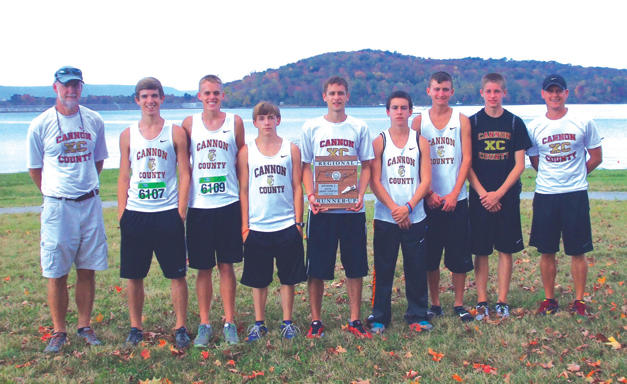 
CHATTANOOGA - Cross-country was not an option for student-athletes at Cannon County two years ago.

One year after starting the program in 2011, Cannon County’s boys team has qualified for the TSSAA Boys Class A/AA State Tournament at Percy Warner Steeplechase Cross-Country Course in Nashville.

The Lions finished second at the Region 4-A/AA meet at the Chickamauga Dam in Chattanooga. By finishing as region runners-up, the Lions entire team qualified. Central Magnet won the championship with 19 points. Cannon County was second with 61 points and Signal Mountain was a distant third with 103 points.

The top three teams and top 10 individuals advance to the state meet.

“This is a very tough region for cross country,” Cannon County Head Cross-Country Coach Marc Larson said. “The second-place regional plaque the boys won represents a lot of miles, sweat and pain that the entire Cannon County team has experienced throughout the year. I am very proud of the boys, girls varsity and junior varsity.”

The Lionettes finished fourth with 106 points, one spot from reaching the state tournament. Central (45), Signal Mountain (58) and Notre Dame (64) were the top three teams.

Jordan Turney and Marshall McReynolds led the Lions with Top 5 finishes. Both earned individual medals. Turney turned in a time of 18:24 on the 5,000-meter course. McReynolds was fifth with an 18:47. Sophomore Jake Burdick narrowly missed a Top 10 finish. Burdick was 11th with a 19:42.

Magana continued her smashing freshman season. She finishe eighth with a time of 23:36 to reach the state tournament.