Cripple Creek Cloggers continue in International Festival of the Pyrenees 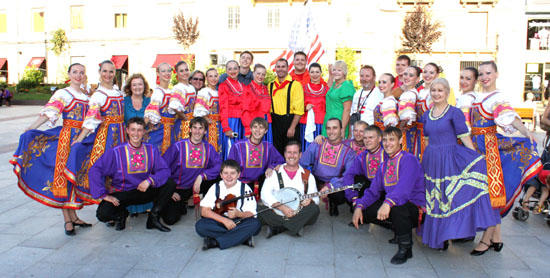 Friendship between Cripple Creek Cloggers, the Rigney Family Bluegrass and the Russian troupe in Jaca, Spain.
Last night's show at the 45th annual International Festival of the Pyrenees featured the Cripple Creek Cloggers as opening act. With several thousand in the audience, the Rutherford County, TN troupe, accompanied by the Rigney Family Bluegrass of Normandy, TN, gave a rousing performance that had all those present clapping vigorously.

Today the troupe parades through three different sections of Jaca, Spain as the town continues to swell with visitors. They move into various parts of the city at 12 noon, 7 p.m. and 11 p.m.

Early on Saturday, the Tennessee group leaves to visit Zaragossa, Spain and to perform in Jaca´s sister city of Utrillas. They must ride back through the night, however, in order to be in Jaca on Sunday for the concluding events of the festival, including a lunch for all 45 troupes, a gift exchange with dignitaries, and a final parade of all groups through the city beginning at 7 p.m. They must then rush to their bus to be able to travel the six hours to the Toulouse, France airport where they will catch early flights on Monday which will return them to Nashville that evening.

Various groups at this festival have already made application to be at Murfeesboro´s International Folkfest, to be held during June 13 through 20, 2010. These include a group from Spain, one from Costa Rica, and one from Latvia.

Ida Satterfield of Kimela Drive in Woodbury is a member of Cripple Creek Cloggers. The next meeting of this group is at 7 p.m. on August 11 at The Vine, 118 W. Vine Street , Murfreesboro 37130. Training and membership are free and open to the public in general. For more information, contact Steve Cates at appdancer@aol.com.