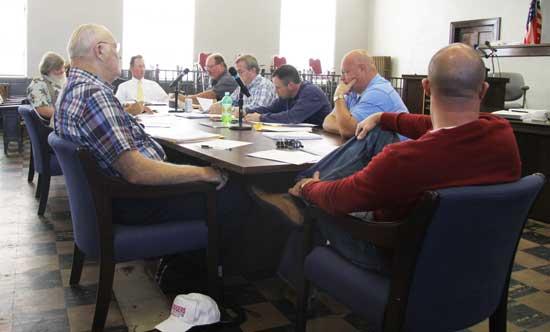 Nine of Cannon County's 10 commissioners met for their quarterly meeting Saturday at the courthouse.
If you commit a crime in Cannon County, it's soon going to cost you more.

At the request of new Sheriff Darrell Young, the Cannon County Commission voted Saturday to raise a number of fees associated with the judicial process and incarceration.

One resolution passed by the commission raises the litigation tax from from $10 to $50. on all civil and criminal cases institutes in the county, other than those instituted in municipal courts, such tax to be in addition to all other privilege taxes on litigation authorized by law.

One immediate need the money from the increased fees will be used for is repair of the roof of of Cannon County Jail, which has experienced problems with leaks for several years and is gradually deteriorating.

Fifth District Commissioner Bob Stoetzel recently was part of a group which inspected the roof.

"When I visited the jail at  the request of the sheriff we found the ceiling of the jail being ruined by the leaks in the roof," Stoetzel said.

"Several of us (commissioners) and a CTAS jail expert went on top of the jail and saw where the basic rubber covering had shrunk and pulled away from the edge. This allows the water to run down the inside of the brick and block walls, which causes inside damage plus mold to start growing.

"The damage to the ceilings inside has been accelerated by these leaks. The jail is now 17 years old and will have to have extensive reconstruction in my opinion.

"The jail is in the worst shape I have ever seen it in, and yes I am biased because I know what it could look like. I went into it after it had been built and occupied for 18 months and it still needed work," Stoetzel said.

Commissioners also voted Saturday to charge a booking and processing fee for persons subject to arrest or summons of $10, and also increased the co-pay amount for medical care charged to inmates to 10 per physician visit and $50 for emergency room or hospital visit.

Mark VanZant addressed the commission about the need for an animal shelter. He presented commissioners with a petition containing over 1,500 signatures from citizens in support of the county building one. VanZant said the problem of abandoned animals in the county has reached epidemic proportions.

"There is nobody in this county that has not been affected by the abandonment of animals," VanZant said. "The situation is beginning to be an emergency in this county. If we don't do something someone is going to get hurt by one of these animals."

Commissioners decided to form a committee to study the problem and come up with possible solutions.

Finding money to build and maintain an animal shelter will be a major issue.

"We need this (shelter) but these are extraordinary times and we don't have the money," Bush said.

See the Cannon Courier Online next week and the Oct. 26 print edition of the Courier for additional meeting coverage.

Print
Members Opinions:
redbird
[Delete]
I am so glad to hear that someone is finally listening about the animals running at large in our county. Our neighbors dogs come over and show their teeth at my granddaughter. They have destroyed my shrubs, attack my cats in my backyard and porch. I cant leave my shoes by the back door or lay my work gloves on the backporch. I feed my cats on the back porch or I should say I try to the dogs eat their food. The first thing we did when we moved into the community was to build a fence to keep our dogs inside. I just dont understand why people think they have the right to let their dogs run free. We have a leash law they ignore.Mr. Vanzant is correct someone is going to be hurt by these animals. Dog bites are quite painful, and I know these neighbors dont give them their shots, they dont feed them much less their shots. Yes, we have called the sheriff time and time again and they have responded promptly. They talk to the neighbors with no such luck. We want to be a good neighbors but enough is enough.