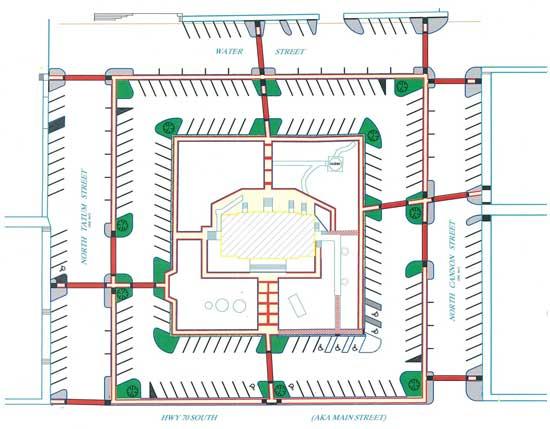 Local officials hope to begin letting bids soon on a long-anticipated project to revitalize and upgrade the area around the Cannon County Courthouse.

In addition, decorative lighting poles, will be placed at all four corners of the courthouse square.

Plans also call for the placement of clocks at each corner, if funding is available.

The project is expected to cost around $800, 000, the major portion of which - $600,000 - will be paid for by a Tennessee Department of Transportation T21 Enhancement Grant. Cannon County and the City of Woodbury are each contributing $80,000 to the cost.

Cannon County Executive Mike Gannon, who along with Woodbury town officials has been working on the project for several years, believes the revitalization will have a positive effect on the community when it is completed.

"The project will improve the image of the Square, and bring more people to town," Gannon said. "Hopefully it will also encourage businesses around the Square to fix up their buildings and therefore enhance the entire area."

"The Square is the center of civic life in the community and we want it to really look good," Gannon said.

"It would have been much more expensive without the grant money, and we want to get it bid now because of the economy," Gannon said.

In addition to making the courthouse handicap accessible, another benefit of the project is repairs and improvements will be made to the area's drainage system.

"What took so long in getting the funding for the project is that we had a drainage issue," Gannon said. "We have to fix the drainage problem before we do anything regarding beautification."

Randy Williams of the Upper Cumberland Development District wrote the grant application which was instrumental in securing the grant.

"The project will really improve the look of the area around the courthouse and make traffic run more smoothly," Williams said.

Williams said several hurdles had to be cleared before the project could get past the planning stages.

"When you are dealing with TDOT, engineering firms and environmental issues, it takes time for everything to come together."

Another benefit of the project is all overhead wiring now going into the courthouse will be moved underground.

"I hope that by fall work can be started," Williams said, "I do not know how long it will take to complete, but it won't be years, only a matter of months."

The Tennessee Department of Transportation is in the process of giving its final approval to the revitalization plans, which could come as early as this week.

The plans have been sent to the state for their approval, according to James Garrett of James C. Hailey and Company, a Nashville engineering firm hired for the project.

"We had to cut down of some of the pretty stuff, the things people will actually see, because about $100,000 has to be spent to shore up some of the area that has sunken in over time due to the fact that when the work was originally done in hand laid stone instead of concrete." Garrett said.

The sidewalk around the inner and outer perimeters of the parking lot will be brick-stamped concrete to make them look more attractive. Trees will be planted at several locations to spruce up the area, and benches will be placed near the Main Street entrance.

The project also includes the extending of walkways from the courthouse across North Tatum, Water, North Cannon and Main streets.