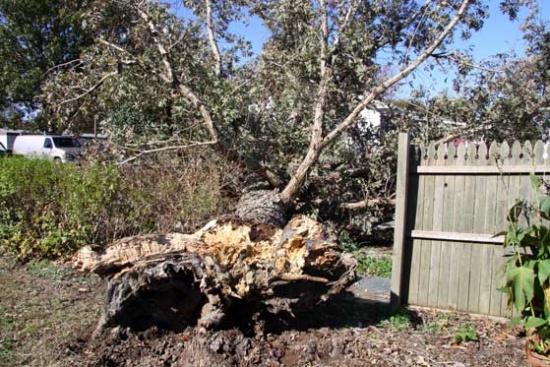 A large white oak tree was uprooted and damaged the residence at 5807 Jim Cummings Highway during storms Tuesday. The strong winds were associated with tornado warnings for Cannon County during the afternoon.
Doug and Sherry Ramsey returned to a major surprise when they arrived at their home at 5807 Jim Cummings Hwy., Tuesday evening.

When the Ramseys returned home from a trip to Murfreesboro they discovered a large white oak tree had been uprooted and fallen across a 1998 Dodge Dakota pick-up truck in the driveway and had damaged a portion of their roof.

Bad as it may have seemed, they were grateful it wasn’t worse.

The tree had been uprooted by strong winds associated with tornado warnings during the day and though it damaged a portion of the roof and the vehicle, it could have been much worse.

“We are really lucky,” Sherry said. “We were in Murfreesboro for an insurance meeting and during the time we were away there were three tornado warnings. We had to go into (a safe place) there at different times and a 45-minute meeting took three hours. We knew there had been warnings (in Cannon County) also, but we really didn’t think much about it. We stopped to get something to eat and then returned home.”

Much to the Ramsey’s dismay their house certainly was not as it was left.

“We pulled into the driveway and I asked my husband (Doug) if he noticed anything different,” Sherry said. “Suddenly he realized his truck was gone. It wasn’t gone; it was hidden under the tree.”

Insurance will cover the damage to both home and vehicle; however, the sentimental value of the 1998 Dodge Dakota can never be salvaged.

“It just broke my heart when I saw that,” Doug said. “The truck belonged to my mother (Ethel Hill). She had developed Alzheimer’s and once she was unable to drive I took the vehicle and was completely restoring it. It was almost finished and so much went into that. It just breaks my heart to look at it. (Insurance) will take care of a lot of it but you can’t replace the emotion and sentimental value involved.”