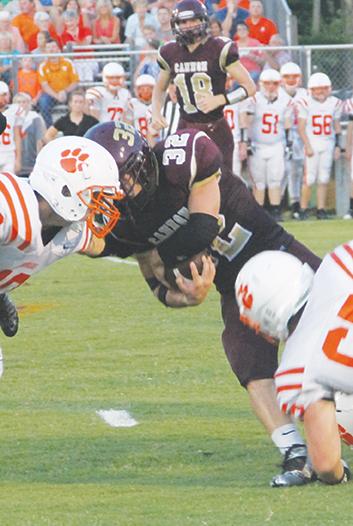 There was no homefield advantage for Cannon County when it faced MTCS in the season opener for both teams Friday (Aug. 22) at Schwartz Field.

Ethan Smith provided the only offensive highlight for Cannon County when he broke free for a 57-yard touchdown run in the second half. It was the Lions’ only score. They missed the 2-point conversion attempt.
Smith finished with 67 yards to lead the Lions’ offense.

Cannon County’s defense was exceptional for the better part of the first half.

MTCS managed to score on its second possession to take a 6-0 lead. The 2-point try failed.

From there, Cannon County’s defense slowed the high-octane Cougar offense until a botched snap on a punt and an interception on back-to-back possessions in the second half turned the tide.

The score was 6-0 MTCS with less than seven minutes remaining in the half. Six minutes later the Cougars had turned two miscues into a 28-0 halftime lead.