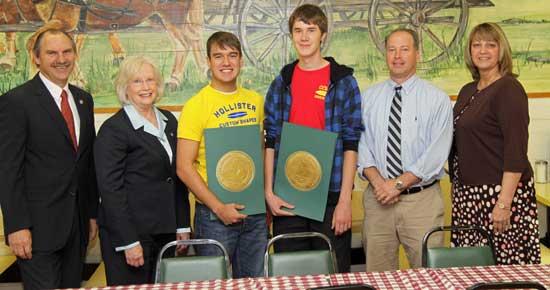 Cannon County High's Valedictorian and Salutatorian for the 2010-2011 school year have been recognized by the Tennessee General Assembly.

Valedictorian Damian Coomes and Salutatorian Jordan Blackburn each received a House Joint Resolution Monday during a ceremony at Joe’s Place.

The resolutions were presented by Senator Mae Beavers and Representative Mark Pody. Also in attendance were Director of Schools Barbara Parker and CCHS Principal Tim Knox.

The resolution honoring Coomes notes he has “earned an exemplary grade point average while participating numerous extracurricular activities, including the soccer team, the Outdoor Club, the Beta Club and the Art Club.”

In addition to the time and energy he has devoted to his studies and school activities, Damian also “strives to improve his community by disposing of hazardous waste and removing litter.”

“A man of faith, Jordan is a devout member of his church’s youth group and enjoys going on mission trips, having recently traveled to the Copper Basin.”

In addition to Representative Pody and Senator Beavers, the resolutions were signed by Speaker of the House Beth Harwell, Speaker of the Senate Ron Ramsey, and Governor Bill Haslam.