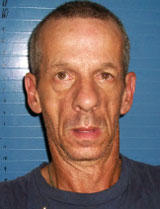 Dorris Dean Cooke, 1133 Centerhill Road, was charged with leaving the scene of an accident, simple possession of a Schedule IV drug, possession of drug paraphernalia, driving under the influence, violation of the implied consent law and violation of the financial responsibility law by Cannon County Sheriff's Deputy Steve McMillen.

Deputy McMillen responded to Charlie Pitts Lane on Sept. 11 following a report of a hit-and-run accident. Upon arrive he, along with Sheriff Darrell Young and Sgt. Randy Neal, observed a black Ford Explorer on the side of Charlie Pitts. A driver described the vehicle that had hit hers and indicated it was sitting in front of a barn at the end of the road.

Deputy McMillen and Sheriff Young observed a white male slumped over the steering wheel  inside a black Nissan 4x4 pickup. Sheriff Young asked the driver to step out of the vehicle. As he did the individual, subsequently identified as Cooke, was very unsteady on his feet.

Sheriff Young spoke with Cooke, who said he was unaware of being in an accident on McMinnville Highway with another vehicle.

Cooke allegedly failed a series of field sobriety tests administered by Deputy McMillen and he was charged with DUI.

As Deputy McMillen was putting handcuffs on Cooke, Sgt. Neal approached them with a pair of hemostats that had a marijuana roach attached to it. Cooke said it did not belong to him and didn't know whose it was.

Cooke was transported to the Cannon County Jail. He refused to submit to a blood alcohol test. Bond was set at $9,500. Initial court date is Nov. 1.