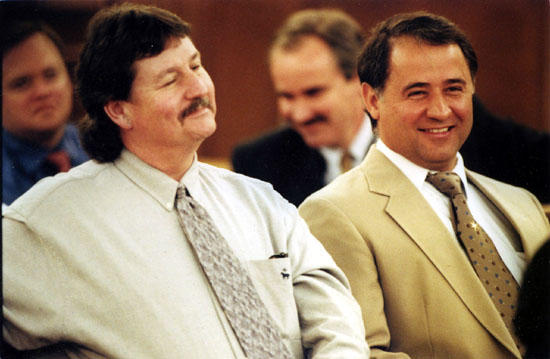 Convicted former Cannon County Sheriff Charley Brandon, Jr., at right, is pictured during his 2001 trial. At left is Mike Simmons. Charges against Simmons for Coercion of a Witness and Conspiracy of a Witness were ultimately dismissed.

Convicted felon and former Cannon County Sheriff Charley Brandon, Jr. wants his rights back and he's suing the State of Tennessee to get them.

In a lawsuit filed today, Brandon is asking the Cannon County Circuit Court to give him all of his civil rights back, including the right to vote and seek public office.

Brandon lost his citizenship rights and resigned as sheriff after he was convicted of certain felonies while holding the office of Cannon County Sheriff.  He pled guilty to official misconduct in 2001 in Cannon County and was convicted by a jury that same year in Rutherford County of conspiracy to coerce a witness and coercion of a witness.

The convictions came after a lengthy investigation by the Tennessee Bureau of Investigation which led to Brandon's indictment on 40 counts of official misconduct, 1 count of sexual battery, 2 counts of tampering with evidence and 1 count of coercion of a witness.

Those charges stemmed from accusations by several female inmates at the Cannon County Jail that Brandon had sex with them while they were incarcerated and that he then attempted to intimidate witnesses involved in the case.

As a result of the indictments, all female inmates were removed from the jail and housed in Rutherford County for almost a year at Cannon County's expense.

Brandon received probation and the sentence period has expired. According Brandon, he has sustained the character of a person of "honesty, respectability and veracity, and is generally stemmed as such by his neighbors."

Brandon also says there is no reason why his petition should not be granted.

Brandon is represented by Murfreesboro Attorney Darrell Scarlett.  The case will be heard before Circuit Court Judge Royce Taylor on December 6th.

The Cannon Courier will bring you more details on this story as they develop over the next several weeks.

Print
Members Opinions:
dailyreader
[Delete]
Charley might try rehab and break down during a television interview, shedding a few tears of remorse---should be no leniency for those who have swore to uphold the law and then disregard that oath.

DebbieJen
[Delete]
This man has some serious issues with his self-perception. How on earth does he think he has the right to sue the state of Tennessee when he himself pled guilty to the misconduct?? Isn't that kind of like saying "yes, I did it" and if so he should suffer the consequences. I cannot believe he wants his rights to run for office restore. Who would believe/vote for him?
lucydog
[Delete]
Finny looks preety good cleaned up!LOL!
tiffyduke81
[Delete]
i think jr. is a good man so he made a mistake label him for life thats the problem with the world no second chances
[Delete]
a lot of ppl are good and make mistakes even mistakes not as bad as what he did but why should he think he is better than any other in the county, city, state or world---and to see him sittng there smiling is just stupid! He done the crime and now he can live with the rsults, because there are plenty others tat have to for less than what he did.
[Delete]
and furthermore--he absolutely does not need to be driving a school bus with teenage girls in their developement stages--i had to take my daughter to school because his stares made her uncomfortable!!!!
ScarletOhara
[Delete]
Good luck Jr. I wish you the best!
jbess
[Delete]
I have the terrible feeling that if he ran for sheriff the "good ole boys" in Cannon County would vote him in!