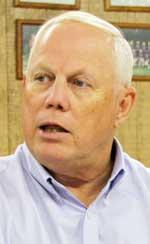 Candidate for Representative of Tennessee's 6th Congressional District Dave Evans recently visited with Cannon County residents in Auburntown. The candidate listened to voter concerns and put forth a vision of traditional family values and a smaller, more conservative federal government.

Evans was critical of career politicians, implying that their dependence on reelection and special interest funding undermines their ability to represent their constituency. He spoke of himself as a "citizen-politician" -- a man who serves his country politically out of a sense of civic duty, not as a career choice.

A retired Major General in the U.S. Army Reserve, Evans is no stranger to civic duty. His enlistment in the Marine Corps in 1968 began a long and outstanding military career. Decorations include a Distinguished Service Medal, Legion of Merit, Bronze Star Medal, and numerous others. Evans' university education yielded him a Bachelors in Business administration from UT in 1977 and a Masters in Public Administration from MTSU in 1980.

The 2010 mid-term elections offer the American people an opportunity to change the legislative tide in Washington, Evans said. Typically, the party controlling the Executive Office of the President loses Congressional seats in a mid-term election as the opposition party focuses resources on these elections.

Evans' platform incorporates many ideas, including incentivizing companies to keep and create jobs in America. The first of Evans' "core beliefs" are that "prayer should be allowed in school" and "no abortions; no same sex marriages."

The candidate's recipe for change in Washington includes the "peaceful and orderly dismantlement of unconstitutional federal programs and agencies" and the "peaceful and orderly withdrawal from international treaties." Evans was also critical of efforts to reduce pollution and move toward clean energy -- specifically targeting the Emissions Trading system that incentivizes business to reduce emissions while requiring those who cannot or will not to buy "emissions credits" from the more efficient businesses.

Tennessee's 6th Congressional district has been represented almost exclusively by Democrats since the mid 19th century, excluding a single Unionist/Republican after the Civil War.

Incumbent Bart Gordon has represented the district since 1985. Both major parties have already identified "at-risk" incumbents for the mid-term elections in order to focus resources where they are most needed. Gordon so far has not been identified as an at-risk incumbent.

Dave Evans demonstrated a remarkable commitment to the American people when he spent nearly three hours at the Auburntown Community Center discussing issues, sharing dinner, and listening to voter concerns. Many of the issues covered don't often make their way to national discourse but Evans showed he was willing to listen.