Conference realignments trickle down to MTSU 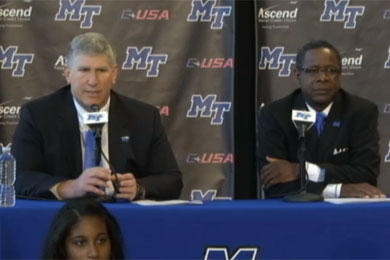 "I'm pleased to announce MTSU has accepted an invitation to become a member of Conference USA," MTSU President Sidney McPhee said. "It is indeed an exciting time to be a Blue Raider fan."

The announcement comes after C-USA members, Tulane and East Carolina, announced they are leaving the to join the Big East.

"We are excited to announce these two schools will join Conference USA," Conference USA Commissioner Britton Banowsky said. "Besides being tremendous institutions, this is a logical move for us. These schools fit well within our strategic plan to be a major market, two-division conference that is student-athlete and fan friendly. We know they will make great contributions to our bright future."

MTSU's addition, along with fellow SBC member Florida Atlantic University, will bring the league to 14 members in 2014. C-USA annouced in May that Charlotte, Florida International, Louisiana Tech, North Texas and UT-San Antonio will join the conference in 2013 and Old Dominion will also join in 2014.

These schools were added to replace Memphis, Houston, Southern Methodist University and the University of Central Florida, who are also joining the Big East in 2013.

Athletic Director Chris Massaro said the univeristy had been in discussions with C-USA in the spring, after the first wave of schools announced they were leaving for the BCS-eligible Big East.

"When the Big 10 began, the dialogue started again," he said, referencing Rutgers and Maryland recent decisions to join the Big 10. These shifts opened up opportunities for schools to realign and cascaded down to MTSU.

The Blue Raiders have competed in the SBC for 13 years. In that time, they have been awarded 38 Coach of the Year trophies, won 54 conference championships, had 63 NCAA postseason appearances and won the Bubas Cup an amazing 66 percent of the time.

"We have dominated the Bubas Cup in the last 10 years," McPhee said.

To top that, in the 2011 season, MTSU was one of only 12 schools with Academic Progress Rates in the top 10 percent.

"This is a remarkable honor we share with some of the elite universities in the nation," McPhee said.