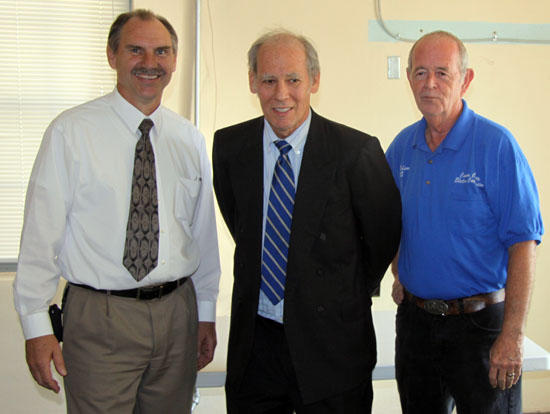 Comptroller Justin Wilson came to the county along with State Rep. Mark Pody as part of a three-county tour of Pody's district.

Wilson said he had roots in Cannon County. "My great-great grandfather lived here and we (his family) go back to the 1820s."

Wilson said he is appointed by and works for the state legislature and is not part of the administrative branch of government.

Wilson described his role as that of state auditor and said he deals with those functions as well as "supervising the state debt."

He assured those persons attending a meeting at the Cannon County Election Office that the "state will meet its financial obligations on a timely basis."

Wilson added that he personally does not study any of the budgets of the state's 95 counties, but said his office does release findings and recommendations when a yearly audit is completed.

A group of citizens who attended the meeting at the election office came to ask questions about a rock quarry being planned at the intersection of Bradyville Road and John Bragg Hwy.

Wilson said there wasn't anything his office could do to stop the project but he did encourage the attendees to study the requested permits to make sure that the company, Stones River Quarry, is addressing all requirements before they are issued.

"They don't need to be doing business if they are not properly permitted," Wilson said.

Rep. Pody said he has been told by the Tennessee Department of Transportation that it would not do anything in terms of a traffic study of the intersection unless it receives a request in writing from the county executive and county commissioners.

Pody also said he was told by a person who operates a quarry located outside of Cannon County that quarries look at he county as a good place to start a business because, "it is one of those counties that doesn't care enough to have zoning."

One citizen opposed to the quarry, Bonnie Thomas, said, "We didn't know anything about it (quarry) and kind of got blind-sided a little bit. It won't be just a black-eye but a turning point. Cannon County will never be the same."

The county already has two quarries operating off John Bragg Highway, one near the Rutherford County line and the other just west of Woodbury.

"We don't have zoning, but we are going to try to get it," Thomas said.