COMMENTARY: What Is Cocaine And How Did It Start? 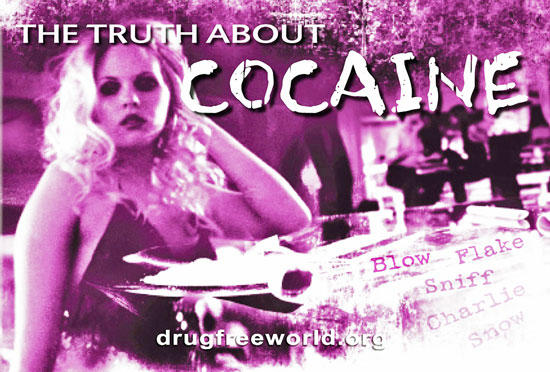 Hello! After reading this booklet called "The Truth about Cocaine" I wanted to let you know about all the facts on this deadly drug. Let me give you a short history on it.

Coca is one of the oldest, most potent and most dangerous stimulants of natural origin. Three thousand years before the birth of Christ, ancient Incas in the Andes chewed coca leaves to get their hearts racing and to speed their breathing to counter the effects of living in thin mountain air.

Native Peruvians chewed coca leaves only during religious ceremonies. This taboo was broken when Spanish soldiers invaded Peru in 1532. Forced Indian laborers in Spanish silver mines were kept supplied with coca leaves because it made them easier to control and exploit.

Cocaine was first isolated (extracted from coca leaves) in 1859 by German chemist Albert Niemann. It was not until the1880's that it started to be popularized in the medical community.

Austrian psychoanalyst Sigmund Freud, who used the drug himself, was the first to broadly promote cocaine as a tonic to cure depression and sexual impotence.

In 1884, he published an article entitled "Uber Coca" (About Coke) which promoted the "benefits" of cocaine, calling it a "magical" substance.

Freud, however, was not an objective observer. He used cocaine regularly, prescribed it to his girlfriend and his best friend and recommended it for general use.

While noting that cocaine had led to "physical and moral decadence", Freud kept promoting cocaine to his close friends, one of whom ended up suffering from paranoid hallucinations with "white snakes creeping over his skin."

He also believed that "For humans the toxic dose (of cocaine) is very high, and there seems to be no lethal dose." Contrary to this belief, one of Freud's patients died from a high dosage he prescribed.

In 1886, the popularity of the drug got a further boost when John Pemberton included coca leaves as an ingredient in his new soft drink, Coca-Cola. The euphoric and energizing effects on the consumer helped to skyrocket the popularity of Coca-Cola by the turn of the century.

From the 1850's to the early 1900's, cocaine and opium-laced elixirs (magical or medicinal potions), tonics and wine were broadly used by people of all social classes. Notable figures who promoted the "miraculous" effects of cocaine tonics and elixirs included inventor Thomas Edison and actress Sarah Bernhardt. The drug became so popular in the silent film industry and the pro-cocaine messages coming out of Hollywood at that time influenced millions.

Cocaine use in society increased and the dangers of the drug gradually became more evident. Public pressure forced the Coca-Cola company to remove the cocaine from the soft drink in 1903.

By 1905, it had become popular to snort cocaine and within five years, hospitals and medical literature had started reporting cases of nasal damage resulting from the use of this drug.

In 1912, the United States government reported 5,000 cocaine-related deaths in one year and by 1922, the drug was officially banned.

In the 1970's¸cocaine emerged as the fashionable new drug for entertainers and businesspeople. Cocaine seemed to be the perfect companion for a trip into the fast lane. It "provided energy" and helped people stay "up."

At some American universities, the percentage of students who experimented with cocaine increased tenfold between 1970 and 1980.

In the late 1970's, Colombian drug traffickers began setting up an elaborate network for smuggling cocaine into the US.

Traditionally, cocaine was a rich man's drug, due to the large expense of a cocaine habit. By the late 1980's, cocaine was no longer thought of as the drug of choice for the wealthy. By then, it had the reputation of America's most dangerous and addictive drug, linked with poverty, crime and death.

In the early 1990's, the Columbian drug cartels produced and exported 500 to 800 tons of cocaine a year, shipping not only to the US but also to Europe and Asia. The large cartels were dismantled by law enforcement agencies in the mid-1990's, but they were replaced by smaller groups – with more than 300 known active drug smuggling organizations in Colombia today.

As of 2008, cocaine had become the second most trafficked illegal drug in the world.

Interesting history! Those are all true facts you can find out by doing your own research if you need to.

There is another concern I have about this drug and it is that children can be the most innocent victims of cocaine.

One often hears the statement, "Yes, I take drugs, but that's my business!" But drug use always has its innocent victims, from those who become prey of addicts seeking through desperate means to finance their drug habit, to those who die in traffic accidents caused by drivers under the influence.

The most tragic victims of cocaine are babies born to mothers who use the drug during pregnancy. In the United States alone, tens of thousands of cocaine-exposed babies are born in a year. Those not addicted often suffer from a variety of physical problems which can include premature birth, low birth-weight, stunted growth, birth defects and damage to the brain and nervous system.

Low-birth-weight babies are 20 times more likely to die in their first month of life than normal-weight babies, and they face an increased risk of lifelong disabilities such as mental retardation and brain damage.

The impact on society of this human tragedy has yet to be fully measured.

As cocaine interferes with the way the brain processes chemicals, one needs more and more of the drug just to feel "normal". People who become addicted to cocaine (as with most other drugs) lose interest in other areas of life.

Coming down from the drug causes depression so severe that a person will do almost anything to get the drug – even commit murder.

And if he or she can't get cocaine, the depression can get so intense it can drive the addict to suicide.

Here are some testimonies of people that were on cocaine:

"I had no more future. I did not see how I could escape my cocaine dependence. I was lost. I was 'exploding' and unable to stop myself from continuing to seriously abuse cocaine. I had hallucinations that animals were crawling under my skin. I felt them each time I s hot up and scraped myself with the point of my syringe until I started bleeding in order to make them leave. I was once bleeding so heavily from this I had to be taken to the hospital." Susan

"Don't touch cocaine. I spent two years in jail because of this drug. And when I got out, life was so hard I started taking the drug again. I know 10 girls who became prostitutes because of coke. It's much more extreme and degrading than we believe. At the time we don't realize to what degree it destroys us." Shawne

The real answer is to get the facts and not to take drugs in the first place.

For more information or to obtain free booklets contact: "The Truth about Drugs" at
www.drugfreeworld.org or email me at thetasaver.dtccom.net or call me at 615-563-4292.

Let's have a drug-free Tennessee!! It can be done.

Print
Members Opinions:
[Delete]
I understand what you are saying,I lost a child from DRUGS. Not anything worse on this earth to deal with. I wish all drugs could be banished from this world. I am on your side.