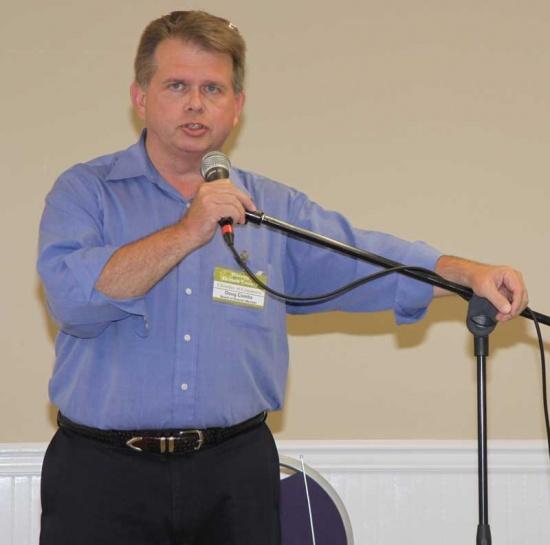 Mixer Master of Ceremonies and WBRY owner Doug Combs.
Young Benjamin Borck did something Friday night at the Cannon County Senior Center that some people three and four times his age were hesitant to do.

The teenage son of Gordon Borck, a candidate in Republican Primary Senate race in District 17, stood up and addressed the audience during the Candidate Mixer sponsored by the Cannon County Chamber of Commerce.

While Benjamin might not be what one would call polished as far as public speaking goes, he more than held his own when compared to the candidates for political office who took to the stage to tell the crowd about themselves.

Benjamin was serving as a stand-in for his father, who was unable to attend the event due to other commitments. It is a role he has been called on the perform at least twice in recent weeks, as he also attended the "Meet the Candidates" function held at the Cannon County Fairgrounds in May.

Speaking before a crowd, large or small, is something most people have trouble doing, including myself. I suspect the reason is it is not something we have to do very often, if at all. Some people are natural talkers and are both outgoing and outspoken, while many others are shy and reserved.

Practicing public speaking, and doing it frequently, certainly helps. Doug Combs, the Master of Ceremonies for the Mixer, has it pretty much mastered. Doug is warm, friendly and likable, all qualities which help when speaking before a crowd. He also spends a lot of time talking to a audience, whether it's over the radio airways as owner of WBRY or at one of the many community functions he is gracious enough to be the MC for throughout each year.

Unlike President Barack Obama, Tennessee Governor Phil Bredesen or even State House Representative Stratton Bone, all seasoned political veterans who make speeches or public appearances often as part of their jobs, people who either hold or are candidates for local political offices aren't called upon to do so as part of their normal routine.

They are just regular people, friends and neighbors, who just happen to either hold, or want to hold, a job in local government. People who are county trustee, register of deeds or court clerk don't have to speak before a group of people on a regular basis to perform the responsibilities of their office. They only have to do it if their running for election or re-election.

Back to Borck in closing: Benjamin told those gathered that he is one of 13 children in his family. He said they live on a mini-farm in Smith County. While he did not mention what they grow on the farm, it is clear what his mom and dad "raise."