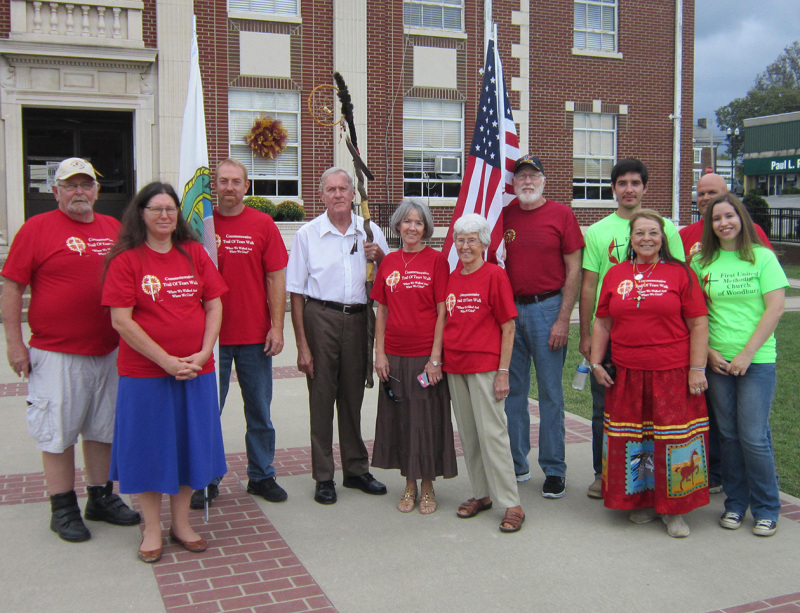 The Commemorative "Trail of Tears" Walk, "Where We Walked and Where We Cried" took place Sunday, Sept. 20 in Woodbury.

In the journal of Rev. Daniel Butrick he records on Nov. 14th (1839) "Mrs. Butrick & myself went on a little before the detachment, & after travelling a mile or two, stopped at a house to dry & warm us, the first time we had been in a house for about five weeks. Here we were refreshed and comforted a few moments by the fire, till the detachment came along, when we joined them and went to a camping place near Stone River. The rain still continued. We stopped to camp again in the wet, but as it seemed necessary to have some new oil cloth to put on the top of our carryall, I rode to a little town called Woodbury about ½ mile distant. On entering a store, the first person I saw was Mr. Trott, formerly a Methodist missionary in the nation, and as he requested us to spend the night with him, we very gladly accepted the invitation. I returned to the camps, and with my dear wife & Jonas, went to his house, where we were peculiarly refreshed. We had not before eaten at a table for five weeks. This kind refreshment seemed provided by a kind Providence, as we seemed, on the point of failing through fatigue and exposure."

The Commemorative "Trail of Tears' Walk recognizes the hardships suffered by the Five Civilized Tribes who were removed by force from the Southeast they includes the Cherokee, the Muscogee Creek, the Chickasaw, the Choctaw, and the Seminoles. These were the tribes of the southeast who were forced to remove to Oklahoma Indian Territory after the passage of the Indian Removal Act Enacted by President Andrew Jackson in 1830. The forced Indian removal became known as the "Trail of Tears" and is one of the darkest periods in U. S. history. In the state of Tennessee the "Trail of Tears" combined water, Northern, Bell, and Benge routes through one-third of the state that included 39 counties. After the Creek Wars 201 years ago more than 25 million acres of land was taken when Andrew Jackson forced the Creeks to sign the unratified Treaty of Fort Jackson. This was one of the events that lead to the forced Indian removal, the greed for Indian land.

"While we live in the shadow of Andrew Jackson, today we can come together in reconciliation and acts of repentance to renew the broken relationships of the past," said Melba Checote-Eads. "The walk is just one step in healing the tragic past. The memorial brings remembrance of those who died along the many Trail of tears that cross our country. Reconciliation between two cultures, this walk is a step toward true reconciliation of what had ended in the removal of a whole race of people. We pray the blessings on all people, as we become part of the walk.