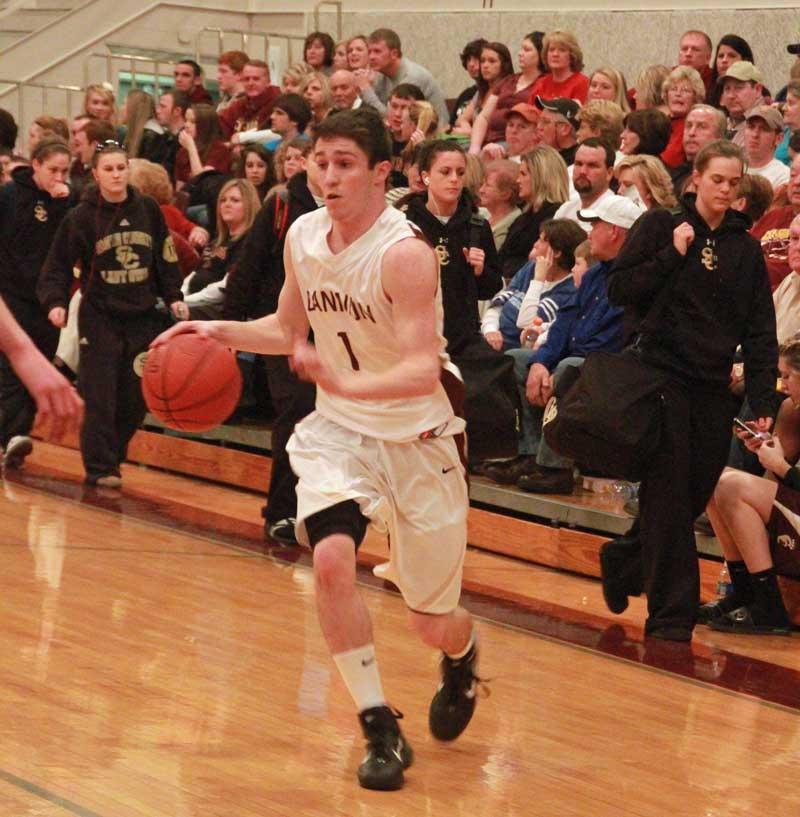 Senior Cody Ruehlen and the Lions will face regular-season champion Livingston Academy in the 8-AA Consolation game Tuesday at 6 p.m. The game is a match-up of the top two seeds. (CANDICE JONES photo).
SPARTA - Sometimes the biggest concerns for coaches in games are the aspects they can't control.

Shooting is one of those.

Cannon County was plagued with unusual inaccuracy from the field and, despite sound defense, could not overcome the shooting woes in a 57-52 setback against Upperman in the semifinals of the District 8-AA Tournament at White County High School Saturday night.

"We had 21 missed shots in the paint. Are you kidding me?," Lions third-year Head Coach Matt Rigsby said. "We really got some good looks and we couldn't convert. You have those nights. You have to give Upperman some credit. They buckled down and played great defense. I felt like we played good defense, but you are not going to win many games hitting 15 field goals over four quarters, especially at this point."

Like an unwelcome plaque, the inability to put the ball in the hole was not prejudice. It affected the majority. Justin Davenport led the Lions with 19 points and Jared Nave added 12, but the percentages were way off.

"You really can't control some things and I'll say this for Upperman, all of those 21 shots we missed in the paint were contested but you have to be strong, go up and find a way to score the ball when you work that hard to get it in a position to score," Rigsby said. "Upperman was sound defensively. They took some charges early and stopped some of our aggressiveness. We didn't want to be passive, and we were."

Cannon County (20-11) had won both tightly-contested regular-season games against Upperman and still had a chance for victory despite an anemic offensive night. The Lions continued to play sound defense to give themselves a chance and limited Upperman to 21 first-half points.

Cannon County trailed 34-30 going into the fourth quarter and still had a chance to win on a night when it wasn't at its best but the Lions surrendered 27 fourth-quarter points. The Bees were 13-of-23 at the free-throw line in the fourth quarter, but they made things interesting.

Upperman built its lead to 10 late in the fourth quarter but it went 0-of-6 from the free-throw line during one stretch and Cannon County cashed in with a 7-0 run, capped by Nave's 3-pointer to cut the lead to 48-45 with 1:06 remaining. Cannon County battled but could never get closer than three down the stretch.

The Lions will face regular-season champion Livingston Academy in the 8-AA consolation game at White County Tuesday at 6 p.m. The Wildcats were upset by DeKalb County Saturday. Cannon County already has clinched a Region 4-AA berth and will either play at Chattanooga Notre Dame or Sequatchie County Saturday at 7 p.m.