Col. Jim up for roasting 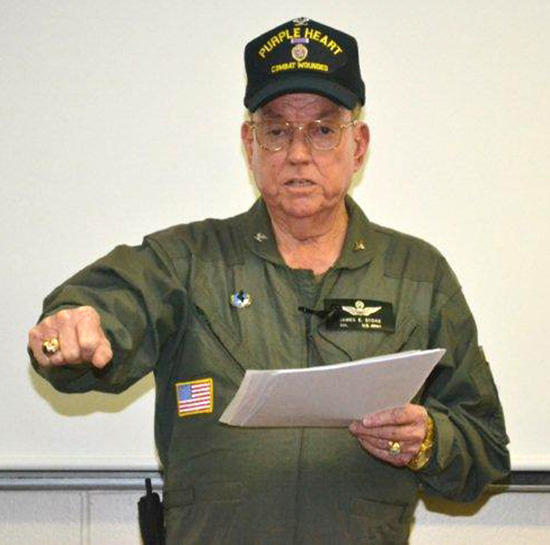 Col. Jim Stone will be the "special guest" at the Friends of Adams Memorial Library's ninth annual Roast and Dinner on Thursday, April 23.
The event - "We do mean ROAST" - of the honorable colonel is set for 7 p.m. on that date in the cafeteria of Cannon County High School.

"Little Jimmy" will be "hoisted on his own petard" by soon-to-be former friends Tommy Bratten, Bobby Ferrell, LTC Doyle Boyd and a series of roasters that all share a last name with the colonel: Charley F. Stone, James E. Stone Jr and James Tyler Stone. If past roasts are any indication, it won't be pretty, but it will be funny.

Jimmy retired as a full colonel after serving 30 years in the U.S. Army.

Last year's "Man-of-the-Hour" was Woodbury vice mayor Charlie Harrell, who was moved to tears (of laughter) by the guest speakers, which included Little Jimmy Stone.The practice of "roasting" someone began with the Friar's Club in New York City which began its series of celebrity roasts back in 1940. The practice became a national sensation with the premiere of Dean Martin's Celebrity Roasts back in the 1970s.

All proceeds from the event go for the enhancement of programs and facilities at the Dr. and Mrs. J.F. Adams Memorial Library.
"Libraries need friends. There are many ways of being a library friend and one of the best ways is to support the Friends of Adams Memorial Library," said Tina L. Norris, library director.

"Through book sales and other fund-raising, Friends of Adams Memorial Library are able to do so many things for the library - from replacing microwaves to purchasing poinsettias, and everything in between," Norris said.

To make a reservation for the roast, you can mail a check to Friends of Adams Memorial Library, 212 College St., Woodbury, TN 37190. Reservations are $30 each.