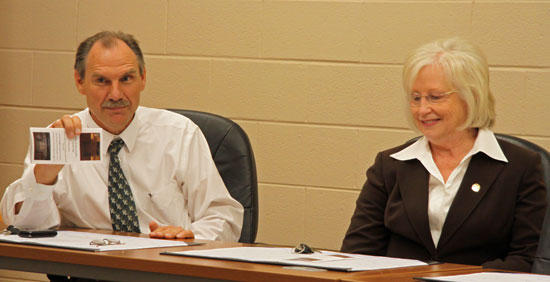 Hugh and Joyce Cobb have a plan for jobs for Cannon County they want to see approved now.

While the president was not at a meeting Friday afternoon at Woodbury Town Hall at which the Cobbs, owners of Cobb Home Innovations, presented their plans for a local manufacturing facility, there were scores of federal, state and local officials in attendance.

Representatives of U.S. Congressman Diane Black’s office, Gov. Bill Haslam’s office, the State Comptroller’s office, the Tennessee Valley Authority and the U.S. Small Business Administration listened as the Cobbs told them of their product and the patented technology used in its manufacturing.

The first product the Cobbs hope to manufacture in Cannon County is lighted décor tiles, which because of the technology used to transmit the background lighting to the tiles, can be placed in wet areas such as bathrooms and kitchens.

“There is no product out there like this,” Hugh Cobb said when asked by Rep. Pody.

Rep. Pody told those in attendance that, “This is the perfect type of invention for Cannon County to produce and the Cobbs are local people who want to stay here and build a business here.”

Hugh Cobb spoke of discussions he has had with potential distributors and merchandisers of the tiles, and with potential customers, which include home builders and remodelers.

While new homes sale have lagged in recent years, Cobb noted the home remodeling business is up almost 200 percent.

The Cobbs are seeking government assistance in the form of building space and loans for equipment and materials, and operational costs. Initial projections are for a local labor workforce of 25 employees.

“Our hope and prayer is to have a labor workforce large enough to help Cannon County,” Hugh Cobb said. “Since we (he and wife Joyce) began this project we have thought it would be a privilege to have this business in this community.

“It would tickle us to death to have a 'Made In America' product made in Cannon County.”

In order for the project to materialize, it will be up to local, state and federal officials to arrange for low-cost loans to purchase equipment, hire and train workers, provide tax breaks and a building or shared location.

The three-year plan projects 100 workers by the second year and as many as 200 by the third.

Print
Members Opinions:
MMW
[Delete]
Surely Black, Beavers and Pody are not seeking some sort of stimulus money from the Feds to crank up this operation?
My goodness what a change of heart after the way they carried on over the last stimulus program.

I am for our tax dollars going for start ups like this, especially when it means local people involved.

And let's increase the taxes on the wealthy to fund thousands of projects like what the Cobbs have in mind. Wish them well!

Pharaphrasing Trent Lott: "South of the Mason -Dixon, it means jobs but it is Pork when going up north"

"The Cobbs are seeking government assistance in the form of building space and loans for equipment and materials, and operational costs."
[Delete]
No, the Cobbs are not seeking "stimulus" funds. They are seeking low-interest loans, something local, state and federal governments have provided long before the stimulus, which did not actually stimulate job growth and did not require repayment.