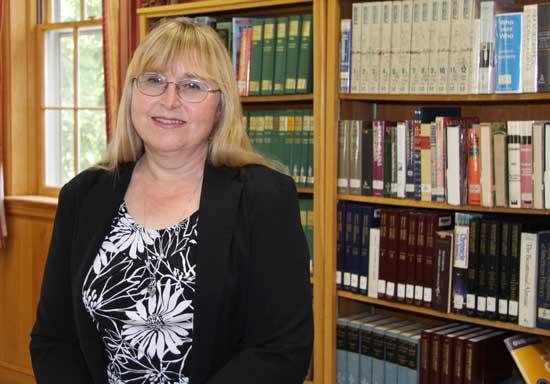 "We were so fortunate to be able to find someone with her background and education; she has all the credentials needed to take this library forward. She comes from a small town atmosphere and knows how a small town operates." Jennings, the Chairman of the Dr. J.F. and Mrs. Adams Memorial Association, said.

Jennings has seen the library from its inception to the next stage which will be a one and a half million dollar expansion. He has spearheaded the growth of the library with the assistance of the Memorial Association which includes members of the Adams family.

Born Rita Kraus in Idaho, right across the border from Montana, Allen was raised in the small town atmosphere of Trout Creek, Montana, which is about 30 miles from Glacier National Park. In Kalispell, Montana Rita says that she had worked at the Flathead County Library as a work study student as a "shelver"; those are the ones who take the books back to where they belong or when new ones come in. She worked for the Flathead County Library. She says that you would not believe how helpful that is when you want a career in a library.

She attended Montana State University in Bozeman and got a BA in English and the next day went right back to work at the Library. She said that she started full time as the children's librarian, "that was so enjoyable; I would go to the school or give tours of the library and had reading time with the children on a weekly basis. Nowadays you even give some computer training."

She then started saving all of her leave time to be able to go to graduate school at the University of Washington in Seattle during the summer months. She went in 1975, '77 and '79 and received her Master's degree. She said that she was so appreciative of the Flathead County Commissioners who allowed her to retain her job when she ran out of the leave time. They kept her on without pay, which kept her position open to her.

She continued to work at the library in a variety of positions. She had been promoted to the reference librarian while getting her Master's. I had asked her what a reference librarian did. She said, "long before the internet you could call us up and ask questions that you needed answers for. We would do the looking for you in any book as long as the book was non-fiction. It virtually kept us running all the time. If you wanted a recipe for apple pie or something about diets, or diabetes we were there to find the information for them. I studied very hard to learn all of this so I could come back from Seattle and help these people. It was like a detective with all the clues hidden in those books, eventually you find them."

When she started with the library there was only the one. Now she says there are five branches, Rita served the county as the librarian for 31 years; she left there as being the director.

I looked up Montana on the Internet; I found it to be the 4th largest state in square miles (147,046) and 44th most populated. To give you something to compare it to, Tennessee is the 36th largest in square miles (42,146) with a population of 5 times that of Montana at 5,689,283 inhabitants. And we seem to have a good amount of area to still run free. To me you could probably go for days without seeing anyone in "Big Sky" country as they call Montana.

So with that in mind I asked Rita how their library was funded. She said that the coal industry and logging industry had paid a fair amount of taxes and at one time she was able to take a share of them (approximately $76,000) and split it between the library branches. When she left there 4 years ago the money was down to $7,000 because of the slowing of the economy. "Montana is in no way a rich state by any means; but in the last two years the Governor has put forward a great effort to find new ways to take coal and refine it to make different fuel types" she said. Perhaps that will help the States' coffers, Montana is known for gold and silver mining, coal, lumber and wheat farming. Rita is comfortable with the small town arena and she just adores the friendly people of small town Tennessee. She said it reminds her of being back in Kalispell where you knew everyone and they would wave back when you greeted them.

Rita claims to be the "classic spinster librarian", having gotten married for the first time 4 years ago probably at the age of 53. I asked her to tell me the story. She said her husband to be (Larry Allen) and her met in 1998 on the internet. "We talked to each other on our computers and then after 7 weeks we decided to meet, so I flew to Las Vegas and he drove the four hours from China Lake, California." Larry was a federal fire fighter at the China Lake Weapons Center, at the time we met both of us had 23 years in our respective careers and it would be a serious mistake for either of us to give that up. So she said they went on dating on the internet and would meet each other for a yearly vacation trip together.

Larry is from Smyrna, Tennessee and graduated from Smyrna High School in 1970 and spent a little bit of time at MTSU and then joined the Air Force. In the Air Force he was a fire fighter and when his tour was over he went to work for the Federal Government at China Lake. Rita says the day she retired she put her house on the market, the library had a going away party in the afternoon to celebrate her 31 years at the library and she hopped a plane to go to Reno to get married. She actually got married a week later to allow her family to gather at Reno for the wedding.

Rita says that after they had been married about a year, they came to Manchester to a big family reunion of Larry's and within 24 hours they had made a decision to move back here. They live in Normandy now and enjoy it, she says that she really doesn't have a notion to move to Woodbury at this time and will happily make the trip every day. Charlie Harrell who heads the Friends of the Library tells the Courier that "I am excited we were able to have her with all of her qualifications. As a member of the Friends of the Library and as a user of the library I believe the people are going to be pleased with her."

We at the Cannon Courier welcome Mrs. Allen and wish her the best in her position of Director of the Adams Memorial Library.