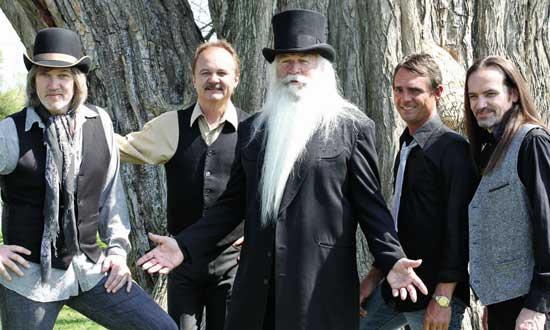 Chris Golden (from left), Jimmy Fortune of the Statler Brothers, William Lee Golden of the Oak Ridge Boys, bass singer Tim Duncan and Jimmy Fulbright bring elements together from two of the most famous quartets in history for a unique musical event with the singing of "Dixie" and "Battle Hymn of the Republic." (Photo submitted)

Imagine sitting in a cold field a few days after Christmas, when across the night air wafts the forlorn strains of a marching band reminding all of a home far away.

This was the scene experienced by both Union and Confederate soldiers at the Battle of Stones River, when the bands for each side took turns playing during a ceasefire. They tried to drown each other out, as the Confederate's played "Dixie," the Union played "Yankee Doodle."

"That was unheard of," MTSU's Zane Cantrell said in a previous interview, "The regimental bands battled each other. Until one band took up 'Home Sweet Home,' the most popular song of the 19th century."

Then the other band joined in and the soldiers sang along.

Like this scene from the Battle of Stones River, music played an important role during the Civil War, which will be profiled in Civil War Songs and Stories, scheduled for broadcast at 7 p.m. on both May 18 and 27 on Nashville Public Television.

"Fundamental to understanding the Civil War era are its many musical legacies, whether the plaintive singing of slaves on the Memphis wharfs, the brass bands of the soldiers, the rousing tunes sung in family parlors or the uplifting voices of promise," said Dr. Carroll Van West, director of MTSU Center for Historic Preservation and Tennessee Civil War National Heritage Area and co-chair of the Tennessee Civil War Sesquicentennial Commission. "Civil War Songs and Stories captures those sounds and memories from the Civil War era."

Great musical performances by some of Nashville's most talented artists are blended with incredible and emotional stories, offering television viewers a unique perspective of the Civil War in the one-hour documentary.

The program is produced by the award-winning multimedia team at the Renaissance Center, in Dickson, which has partnered with NPT to develop a series of documentaries marking the 150th anniversary of the Civil War.

The special highlights the stories behind the songs and the emotional impact music had on soldiers and families before, during and after the conflict.

From pride and patriotism to death and defeat, the documentary describes how music was as much a part of Army life as a musket.

The narrative explains how both sides were accompanied by professional regimental brass bands mustered to preserve morale.

The music inspired soldiers and consoled them.

It brought memories from home and gave hope to what would soon seem to be hopeless circumstances.

The program features modern interpretive performances by such artists as the legendary Crystal Gayle and American Idol sensation Bo Bice, Country Music Star William Lee Golden of the Oak Ridge Boys, and Jimmy Fortune of the Statler Brothers. These performances bring elements from two of the most famous quartets in history for a unique musical event with the singing of "Dixie" and "Battle Hymn of the Republic."

Other artists include Irish Folk Singer Maura O'Connell, the Fisk Jubilee Singers, Jason Ringenberg (of Jason and the Scorchers and Farmer Jason) Don and Katie King, Les Kerr and the Bayou Band, Elizabeth Foster, and the Princely Players.

Sharing their expertise in the documentary are Dr. Reavis Mitchell, dean of humanities and behavioral social sciences at Fisk University, Dr. Dale Cockrell, director of the Center for Popular Music at MTSU, author of more than 70 books or articles, and also professor of musicology at Vanderbilt University, and Dr. Crystal DeGregory, an historian with degrees from both Fisk and Vanderbilt University.

For more information on the documentary, visit wnpt.net.