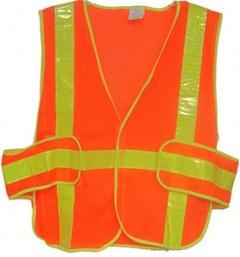 Persons collecting money for organizations conducting roadblocks in the Town of Woodbury will be required to wear reflective clothing beginning Dec. 1, 2009.

The board took action on the matter following a recommendation by Woodbury Police Chief Tony Burnett.

"About three weeks ago I had a lady call, who was actually calling for another lady, she was extremely upset," Burnett told the council. "She had came through during one of the roadblocks and actually was really upset because she thought she had run over somebody. What she had actually done was hit the woman's bucket and knocked it out of her hand and taken that money.

"One thing I think we need to consider is if state workers, city workers, or county workers, are in the roadway, it is a law that they must wear ANSI 2, ANSI 2 compliant vests. We have got roadblock workers standing in the road taking up money that I'm scared somebody is gonna get run over, especially with the hours that we've got now and it getting darker earlier."

In another matter, Burnett brought up the matter of traffic control at Brown-Spurlock Park.

"The second thing is yesterday I was sitting in city park having a discussion with someone and had my radar on and of course there is no posted speed limit in city park and I don't even think it's considered a city street through the middle of the park, it's just a park, and I clocked two people through there at about 25 miles per hour. 25 miles per hour may not seem like a lot to you, but if you are in that park and you're watching vehicles coming through there it's extremely fast.

"I want to make a recommendation that we put a 10 mile per hour speed limit sign on each end of that park," Burnett said. "We want to keep that placed as safe as we can."

Vice-Mayor Charlie Harrell made a motion that the 10 mph speed limit signs be installed at the park, the motion was seconded by JoAnn Davis, and it carried unanimously.

In other action the town council:

• Decided to ask the Tennessee Department of Transportation to make the right hand turn lane at the intersection of West Main Street and Adams Street a turn lane only.

"You have to watch some of those people coming on your right there," Harrell said. "If you are not alert, you've got a problem. I move that we ask them that we want it to be a right hand turn lane only and see what they say."

The motion passed. If approved by the TDOT, the cost for any changes would be at the town's expense.

• Fire Chief Bill Johnson said the town was still in the running for a grant to construct a new fire department. A decision may come sometime in December. Johnson also said the fire department was working on a five-year planned that he hoped to present to the council at its next meeting.

* Decided to do more research on an issue brought before it by Doug Sneed concerning building permit fees. Sneed, a contractor, said a building inspector coming out of Rutherford County received $250 out oiut of a $253.50 permit. "The point I would try to stress is if you were getting the money here I would have no problem with it but to pay somebody $250 to come from Murfreesboro is ridiculous," Sneed said.

• Mayor Harold Patrick reported that work on the Courthouse Revitalization Project could begin as soon as Nov. 17.