Christmas Parade One Of Largest In Recent Years 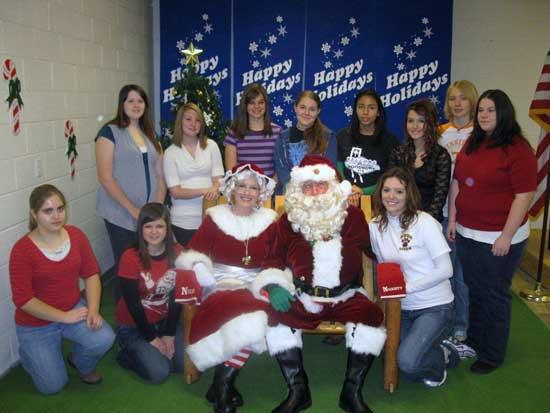 The first Saturday in December is a day to get to town early to find a good spot to watch the annual Woodbury Christmas Parade hosted by the Woodbury Lions Club. As the spectators began to arrive, parking lots and sidewalks started to fill up waiting for the clock to strike 12:00 noon.

At High Noon, Jerry and Janice Higgins, aboard their beautiful spotted saddle horses and carrying the American and Tennessee Flags, turned onto Main St. to officially lead the parade as they have done for many years. They led the parade through town and turned on McCrary St. then onto Lester St. so the residents of the Nursing Home could view the parade from the huge windows in the activity room located at the back of the facility.

Many groups, companies and churches prepared floats. There was something for everyone from Thomas the Tank Engine to Smokey the Bear. Burt Baptist church presented a nativity scene. Huff and Puff trucking had a winter wonder land. The emergency personnel of the county, from rescue, ambulance and fire departments, were out in force. Boy scouts and Girl scouts each had an entry. I don't have information on everyone who was in the parade and if your name wasn't mentioned please know that we truly thank all of you for coming out.

Then came the moment the children were looking for. On the Woodbury Lions Club float, was the jolly man in red, Santa Clause. This year, Santa brought Mrs. Clause to see all the girls and boys in Woodbury. Lion Danny Miller and his crew prepared the float for Santa. The double rocking chair that Santa and Mrs. Clause sat in came all the way from their house. As the parade turned onto Lester St. Santa asked Lion Bruce Steelman, who was driving the truck pulling his float to stop. Santa and Mrs. Clause got off the float and went into the nursing home. He spoke to everyone there and had is picture made with all who wanted it.

Last but certainly not least was the mule teams and horses. Cannon County has a long history of producing some of the finest horses and mules. The Cannon County Walking Horse Association had two beautiful horses carrying their banner along with members on their float. The Middle Tennessee Mule Skinners Association had six wagons.

The Woodbury Lions Club would like to thank all who came to be a part of the parade. Over 80 entries help to make it one of the largest parades we've had in years.

The Cannon Courier was there taking pictures of the parade and you can see them at the Photo Gallery at cannoncourier.com

The Woodbury Lions Club would like to offer a special thanks to the deputies and police officers who blocked the roads and watched out for the safety of the people in the parade and those watching along the street.