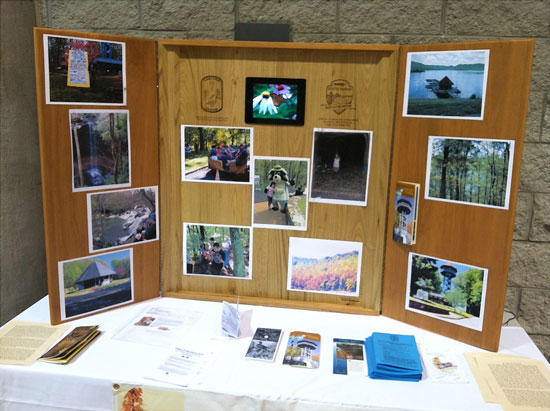 Greg Christensen used chestnut for the body of the tri-fold display and cherry for the two sides. Both the Tennessee State Parks emblem and the Edgar Evins State Park patch are burned into the face of the display.
Greg Christensen's birthday was topped off, like icing on the cake, when he received special recognition at the Annual Conference of the Friends of Tennessee State Parks Coalition at Paris Landing State Park last weekend.

An American Chestnut tree, now rare due to the blight that has made them almost extinct, had grown in the park without notice until a few years ago.

When it was discovered, the tree was specially treated by noted tree botanists and other experts. Despite all the TLC it succumbed to the blight about three years ago and had to be cut down to prevent it from falling over the road.

Similarly, a beautiful black cherry tree growing in front of the park's Visitors Center had to be cut down about the same time. The wood was harvested and cured for special applications.

Since then wood from the two trees has been used to make four prized porch swings that sold for $800 each through the Joe L. Evins Appalachian Center for Crafts, Smithville. Two of the swings are in Washington D.C., one is in California, and one is in the residence of the Governor of Tennessee.

Christensen used chestnut for the body of the tri-fold display and cherry for the two sides. Both the Tennessee State Parks emblem and the Edgar Evins State Park patch are burned into the face of the display, which also has a built-in digital picture screen featuring the photography of Mark Taylor, a Ranger at Edgar Evins State Park.

Christensen plans to refine the design even further but was working under a short deadline. Even without further enhancements the beautiful unit took first place in the state competition.

Greg Christensen and his wife, Lori, live in Cannon County. He works for Nissan and she teaches high school in McMinnville in addition to owning the Cannon Arts Dance Studio in Woodbury. They are active members of the Friends of Edgar Evins State Park and serve on its Board of Directors.