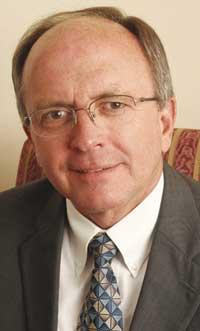 MIKE GANNON
A grand event nearly six years in the making will take place this Saturday (July 24) in downtown Woodbury.

The “Celebration On The Square” will put the finishing touches on the nearly $800,000 Cannon County Courthouse Revitalization project.

The day will be filled with music, food and fun, along with remarks by those persons responsible for pulling the project together. A complete list of activities can be found on pages 20 and 21 of this issue of the Courier.

Sponsoring and coordinating the Celebration are the Cannon County Chamber of Commerce, Cannon County Government and the Town of Woodbury.

The idea for the Courthouse Revitalization project began on the Spring of 2005 when County Executive Mike Gannon approached Randy Williams with the Upper Cumberland Development District about the possibility of obtaining a grant for improving and updating the Courthouse.

Williams suggested a Tennessee Department of Transportation Grant and agreed to write the proposal. A resolution was passed in 2005 by the Cannon County Commission and the Woodbury Board of Mayor and Aldermen to apply for the TDOT and to be equal partners for matching funds.

“This was a much needed improvement for the Courthouse Square and Downtown Woodbury,” Gannon said, “If it were not for the grant, these repairs

would have soon been funded at the expense of Cannon County taxpayers.”

Enhancement grants are funded with federal highway funds through state transportation departments and can only be used for the purpose stated in the grant. Had these funds not been awarded to Cannon County, they would have gone to another county.

The contract was awarded in November of the same year, and the Upper Cumberland Development District along with the firm of James C. Hailey and Company, Consulting Engineers, began working with local officials as well as TDOT planning the project.

Federal and state regulations required various environmental studies and clearances along with other planning that delayed the construction phase of the project. The planning stage, which is a vital component to the project, typically takes years to complete. For instance, Pickett County also received grant money towards a similar project in 2003 and has just recently begun work.

In December of 2009, TDOT granted Cannon County the authorization to begin the construction phase. The total cost of the project was $795,850. The grant paid $636,680 while the county and town paid the remainder of the expense.

The engineering firm handled the bidding process for the construction. As required by TDOT, the project was advertised in Tennessean and local newspapers. Four companies turned in bids, with local contractor Preston Brothers Construction being the low bidder by $30,000.

During construction, the underground drainage system was repaired at a cost of approximately $125,000. The sidewalks, which were in poor condition, were replaced. Two city streets were paved.

The official dedication ceremony will begin at 10 a.m. Saturday.

“I encourage everyone to join us in celebrating our beautiful revised Courthouse,” Gannon said.