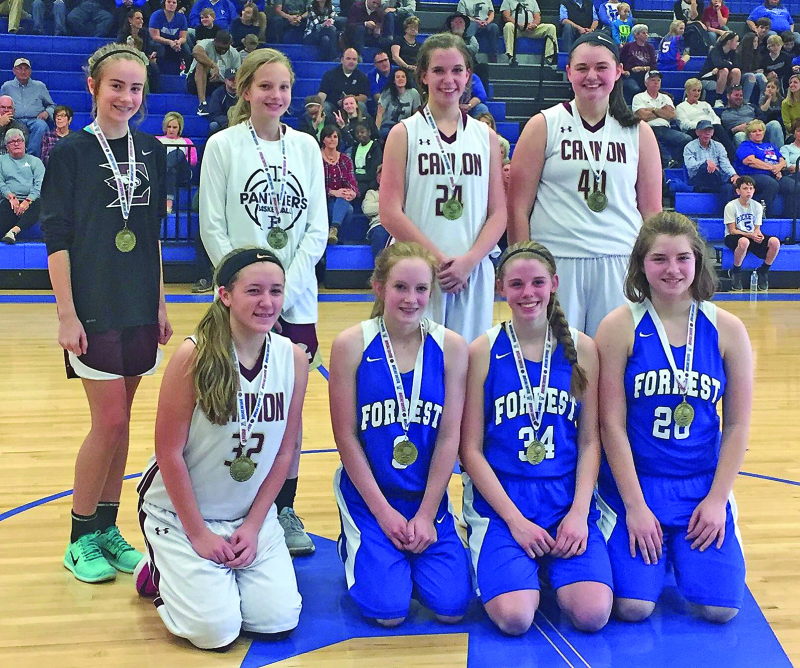 A mixed learning experience continued for all four Cannon County basketball teams last week, including a continuing losing streak for the high school teams against some of the best competition in the district. While, the middle grade basketball teams finished up their first ever season with a pair of losses in the title games of the Forrest Tournament.
After losing a couple of late season home games, because of snow, which were cancelled all together, the CCMG Lions and Lionettes headed into their unofficial postseason with a lot of momentum, including a couple of impressive wins over White County on eighth grade night last week.
The players and coaches on both CCMG were disappointed that their season was coming to an end since the rivals turned teammates and friends were starting to gel together as a well-oiled squad.
Their final two games of the season were at Forrest School in Chapel Hill during a four-team single elimination tournament, which included CCMG, the host Forest, Page and Eagleville. Both the Lions and Lionettes faced neighboring foe, Eagleville in one semifinal.
Both teams easily advanced to the championship game in dominating fashion as the Lionettes won 32-14, and the Lions was also winners, 54-13 as all but one boys players scored in the win.
Two nights later, both the Lions and Lionettes fell short in their respective title games as the girls lost to the host Forest, 36-25, and the boys fell to Page 47-29.
Even with the losses, both CCMG head coach Ashley Cantrell and Jared Nave was proud of their team's performance during the tournament, especially how the Lions and Lionettes finished out the first ever season in program history.
"I was very proud of our Lionettes this past weekend," Cantrell said. "They played with heart and gave it 100 percent and you cannot ask for any more than that. We came up short in the championship game, but I felt like our girls played well."
Nave added, "It was a great game, we battled and battled. We were tied at the half, and my team gave full effort the entire game. Honestly, they played awesome. I told them before the game, win or lose, we have competed this season, and I am proud of every one of them. They never backed down and they were big, (Page) had a kid that was six feet, six inches. I was proud of them."
Both the Lions and Lionettes finish the season at 4-6, including two sweeps against White County, a home sweep against Covenant Academy, and a tournament sweep at Forest against Eagleville.


CC High School
As for CCHS, they were swept at Robert A. Harris Gymnasium Jan. 20 by the best team in the district and one of the best in the state in Upperman, and on Jan. 24 they were swept again this time at Smith County.

Lionettes vs Upperman
The Lionettes were facing the No. 1 team in Class AA, and the 2016 runner-up in the state tournament, Upperman Lady Bees. They had already met twice this season with the Lady Bees controlling the action with comfortable wins, 77-30 on Dec. 2 and 73-22 on Dec. 30 at the Winterfest Shootout.
This game was no different as two Upperman players combined for more points, 52 than the entire Lionettes in an easy 85-51 win, including seven threes from Gracie Maynard for 27 points, and 25 points from Akira Levi, who is in the running for Class AA Miss Basketball this season.
A few nights later, the Lionettes dropped their third game in row with a 66-50 lost at Smith County to now make their record to 8-14 (2-7 8AA). However, the Lady Owls were also ranked Top 10 in Class AA.
"We showed some good flashes in each game, however we are failing to play defense for four quarters, and until we buy into that concept we will struggle against quality opponents like Upperman and Smith County," CCHS Lionettes head coach Jonathan Odom said.

Lions streak continues
As for the Lions, they still haven't won in 2017 as their losing streak expanded to six with a 69-40 loss to the Bees on Jan. 20, and an 82-64 loss at Smith County, four days later.
Against Upperman, the Lions only connected on one long distance shot, but at Smith County, junior Cole George knocked down three balls from everywhere, including some from college and NBA range. In total, he nailed eight out of 12 (67%) from long distance, which tied a school record, which was set on Dec. 27, 2009 by Cody Ruehlen, who nailed eight threes against McMinn County.
This week, CCHS hosted rival DeKalb County on Jan. 27, and they will also host York Institute on Jan. 31 at Robert A. Harris Gymnasium with both games tipping off at 6 p.m.