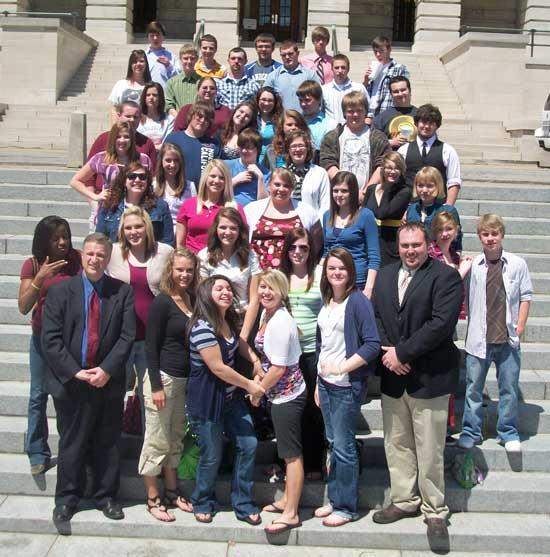 •  The class was recognized on the House and Senate floors.

Rep. Brooks stated to the entire House in introducing Mr. Curtis, “We have a very special guest with us today who has achieved the ‘Tennessee Trifecta.’ He is a constituent of Rep. Terri Lynn Weaver, teaches at Cannon County High School in Rep. Mark Pody’s district, and went to Lee University with me.”

Curtis continued, “I got to sit next to Rep. Brooks and participate in discussions with various representatives on the floor, while my class looked on from the gallery.  This was a very special time for me.”

• The class had lunch in the Legislative Plaza Café.

• The class had a special meeting in a committee room with Rep. Mark Pody’s Administrative Assistant Debbie Stephens.  Students asked questions and became aware of the committee processes, and they were presented certificates of attendance signed by Representative Pody.

The U.S. Government Class of Cannon County High School would like to thank Representative Mark Pody and his assistant Mrs. Debbie Stephens for helping make this trip possible and with great success.  Also accompanying the group was Mrs. Lisa Murphy and Mr. T. J. Daniel – CCHS Teachers.  These students will remember and hopefully utilize in the future this memorable experience in Tennessee State Government.