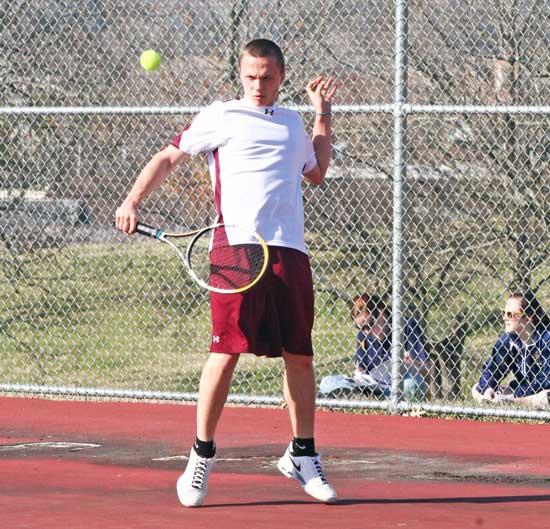 Tuesday, March 16, the tennis team opened their season with a match against Middle Tennessee Christian school. The boys had a difficult time knocking the rust off of their game as they fell to the Cougars, 4-3. Ethan Womack won his match at #4 singles (8-1), and Taylor Blanton, playing at #5, won his match (8-2). The doubles team of Zac Barker and Womack won #2 doubles, 8-5.

Thursday, the team traveled to Clay County for their second match of the season. The Lions improved their play from the previous match as they blanked Clay County,

The team welcomed Webb School to Brown-Spurlock park for their third match of the week. The Lions continued to play good tennis defeating the Feet, 5-2. Aaron Hollis won his #1 singles match rallying to win the last three games of his pro-set to take a 9-7 win. Ethan Womack, in the #3 spot, also came from behind in his 8-6 win. Taylor Blanton jumped out to an early lead in his 8-4 #5 singles match victory. The doubles team of Hollis/Womack capped the team win downing their opponents, 8-6.

The 2010 baseball season got cranked up Monday night at Jackson County. Andrew Woodin was on the mound and pitched a great game through 6 innings with 9 strikeouts and no walks. The Lions were held to only 2 hits on the night, while Jackson County capped their 5-0 victory with 4 runs scored in the 6th inning.

Tuesday night, the team was in Murfreesboro to face Middle Tennessee Christian. The Lions’ bats came alive scoring 4 runs in the first 3 innings. Brock Francis and Cody Phillips led the offense with a pair of hits. Trent Fagan pitched 5 strong innings with 8 strikeouts and a no hitter. MTCS was able to put 6 runs on the board as the result of 5 errors by the Lions in the 6th inning, leading to a 6-0 loss.

Thursday afternoon the Lions traveled to South Pittsburg to compete in the Home Run Classic. The first game was against the Huntland Hornets. Huntland got out to a quick 2-0 lead, but the Lions were able to keep it close with great diving defensive plays by Andrew Woodin and Austin Brown. Cannon scored 2 runs in the 3rd and 1 in the 4th to take a 3-2 lead. Cody Lorance continued the strong pitching performance just like the starting pitchers in the two previous games. Cody threw a complete game, allowing only 2 runs on 5 hits. The Lions put the game out of reach scoring 6 runs in the 6th inning led by Cody Phillips and Brock Francis with 2 hits each.

The Lions are in the process of starting a web-site which will allow the local fans to keep up with game statistics throughout the season. Go to hometeamonline.com and search Cannon County High School, and that will take you to the Lions’ homepage.

CCHS boys soccer traveled to Middle Tennessee Christian on Monday, March 15. The Lions played a hard-fought game, but came out on the losing end, 6-3. Lion goals were scored by Sebastian Novoa, Daniel Woodin, and Devin Hill.

On Tuesday, the Lions played host to a very strong Smith County team. Cannon was unable to match the firepower of the Owls losing their first district game, 5-0.