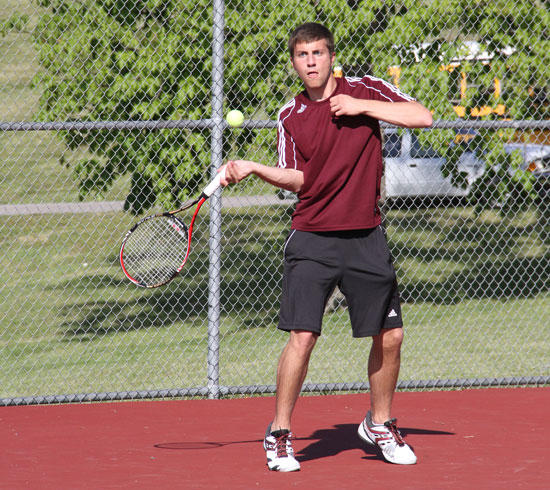 The Lions were not as fortunate, dropping a 6-3 decision against the Wildcats.

Jordan Hollis had an outstanding match but suffered an 8-6 setback; however, the Lionettes came back with four straight points in singles.

Sara Hickman turned back Hannah Hoover, 8-5, at No. 2 singles, and Katie Hickman won a thrilling 9-8 decision by taking the tiebreaker, 7-5, at No. 3 singles. Camille Gilley and Kristen McReynolds made quick work of their opponents and captured 8-0 victories at No. 4 and No. 5 singles, respectively.

The Lionettes sealed the victory in doubles. Katie Hickman and Gilley won 8-2 at No. 2 doubles, and McReynolds and Barnes won 8-4 in No. 3 doubles to seal the victory.

The boys were not as fortunate.

Taylor Blanton got the match off to a strong start when he beat Jordan Murphy, 8-3, at No. 1 singles; however, Livingston Academy won Nos. 2-5. Although the Wildcats secured victory many of the matches were tightly contested.

Hunter Brown suffered an 8-0 setback at No. 2, but Dylan Couch lost 8-4 to Ryan Wilson at No. 3. Cole Kaney put together a tremendous match before falling 9-7 at No. 4, and Wesley Sadler’s match could have gone either way before he finally fell, 8-6, at No. 5 singles. Daxton Patrick won 8-2 at No. 6 singles.

Earlier in the week, Cannon County split with Coffee County at the Woodbury City Park.

The boys captured a 4-3 win with Brown and Kaney winning singles matches. Blanton and Brown also won at No. 1 singles.

The Lionettes suffered a 5-2 setback against Coffee County. Katie Hickman won the only winner in singles, taking an 8-4 win against Hollie Moore at No. 3.