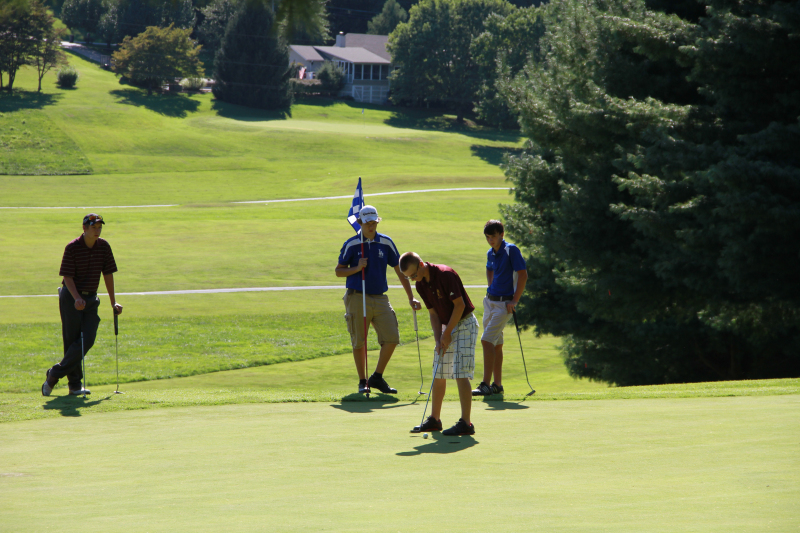 The regular season is almost here for most of the CCHS fall athletic teams as the preseason is coming to a close. At the same time, the Cannon County Junior Lions football team, and the Lions golf team continued the early portion of the 2015 campaign.

It was only a quarter of action last Friday night, but the Lions first-team defense continued its shutout streak during the preseason against the Red Hawks. Last week, in a scrimmage against Sale Creek, the same CCHS defense did not give up a point either.
"This offseason we wanted to be more disciplined and prevent the offense from scoring, and we just need to continue to so," Lions senior linebacker Bo Bryson said.

Senior Lions linebacker Bo Bryson had an interception, while senior running backs Jeremy Litchford and Austin Brock scored the only points for the Lions in the win. The game was only 12 minutes long, which the length of a quarter.

The JV team fell to Cascade 14-0 in the second game for the Lions, which was also only a quarter long.
The 2015 season begins at Community on Aug. 21.

"Everybody is ready to play and excited about Friday night," Bryson said.
CCMS football-Mt. Juliet Christian Academy 16, Cannon County 0 (Aug. 11)
The tough start to the season continued for the Junior Lions as they dropped to 0-3 on the 2015 season after falling to the Saints earlier last week. However, they had to start the season with three games in five days with only 14 players.

Once again, CCMS got off to a slow start giving up 16 quick points to MJCA, but the second half belonged to them as they did not give up another point during the loss. In the three losses this season, the Junior Lions have held their opponents scoreless during the second half as Remington James, Nathaniel Campbell and Wade Love led the way defensively during the loss on Aug. 11.

"They got to come out in the first half and play like they did in the second half," CCMS head coach Jason Elrod said. "We had a good practice."
Now, the Junior Lions gets a few days off before hosting DeKalb County on Aug. 27. During the time off, Elrod said the team will be working on everything before the next game.

CCHS was led by Hunter Vickers (43), Briar Jakes (45), Bradly Vickers (54), and Chris Young (60) during the Aug. 10 match at Smithville Golf Club. Only the lowest four players' scores are figured into the final standings.

The following day, the Lions were led by Hunter Vickers (41), Briar Jakes (42), Bradly Vickers (53) and Chris Young (59) at Mountain View during a four-team match.

The Lions finished up the week at Hidden Valley with Briar Jakes (42) leading the way with Hunter Vickers (50), Bradly Vickers (52), Chris Young (52) finishing up the scoring.

Next week, the Lions host Upperman on Aug. 18 at Smithville, and DeKalb County on Aug. 20 at River Watch.
CCHS Cross-County- Cookeville Jamboree (Aug. 13) Boys- Devin Gilpatrick (19:47.19); Girls- Hannah Whited (21:33.04)
The Lions and Lionettes cross-county teams finished up the preseason with a meet at Cookeville High late last week. It was the final tune-up before the regular season begins on Aug. 29 in Smyrna.

The Lionettes finished second in the unofficial team standings since this was a Jamboree, while the boys were third overall at the same event. Whited was second in the girls' race, while Gilpatrick was fifth overall in the boys' race.
Both teams will open the regular season at the Voyles Classic in Sharp Springs Park in a couple of weeks at 8:30 am.
CCHS Girls Volleyball- Warren County 3 (13-25, 12-25, 11-25), CCHS 0 (Aug. 13)

A new era for the Lionette program under new head coach Linda Cook started with a preseason match at home late last week against the Lady Pioneers.
CCHS had several chances to keep the match close, but the more experienced WCHS team went on long scoring runs to put the set and match away. However, Cook and the players were pleased with the starting lineup, who played the entire match, Emmy Sissom, Madelynne Bogle, Haley Mooneyham, Katie Hoskins, Shianne Ashford and Courtney Davenport.

"I feel like we did pretty well, because WCHS is a good team," Mooneyham said after the match. "I think we worked together more tonight than we have in probably two years. We played more as a team tonight than we have in a long time, but we still need to work on communication skills and moving. We can work on that in practice."

The Lionettes opened the regular season on Monday with a tri-match against Warren County and Franklin County at Warren County. They head to Smith County on Aug. 20.

The Lionettes went 0-4 during the preseason event, which each match lasted 30 minutes apiece. However, CCHS had to play back-to-back matches with a short break in between during a couple of the matches. The Lionettes lost to DeKalb County, Livingston Academy, White County and Macon County.
However, CCHS head coach Dorinda Walker was happy with the team's performance during the event.

"Overall, I was pleased that everybody played their positions well," Walker said. "I think it was good eye-opening experience, and we put our drills to use in game situations. Everybody played well as a team."
The Lionettes open the regular season on Aug. 20 at home against Marshall County at 6 p.m.