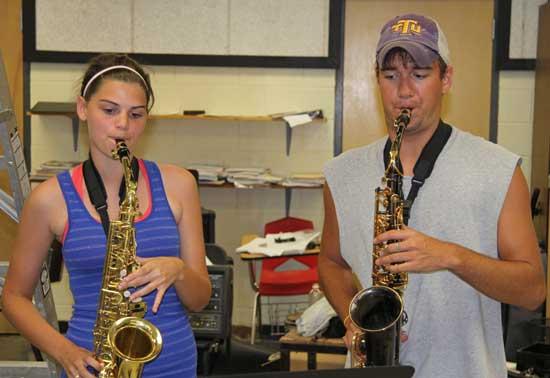 Mary Harris, left, and Jordan Blackburn.
Band members at Cannon County High School have just finished a long, grueling morning session of band camp under the hot, sweltering sun on blazing asphalt on one of the school's parking lots.

They are exhausted - physically and mentally - and excited about the much-deserved 90-minute break they have so generously received from Band Director Steven Porter.

Enough with the moaning and groaning, it's band camp, right? What could possibly be so difficult about marching and playing music?

"We actually started camp (two weeks ago), going four hours a day and (last week) we extended that to eight hours a day with lunch in the middle of the day," senior drum major Jordan Blackburn said. "It's hot and we are under the boiling sun of July. You go home exhausted, people are getting sun poisoning and heat rash but we push through it. Our first game is Aug. 20 (at Spring Hill) so we have to be ready. We have to push through the pain."

This is how band members look at it. They, too, are gearing up for the football season opener because they, like the football players, have to be in shape if they expect to perform at a high level.

"It takes a lot of work, especially if you have not done anything like this before - marching and playing," said CCHS Band Director Steven Porter, who is entering his fourth year in his current capacity. "It is very cardio, more so than people think or imagine. There is a lot of preparation that goes into it, putting a design on the field that goes with the music that is aesthetically pleasing and also entertaining to the audience."

The CCHS Marching Band will be somewhat smaller in numbers this year but junior drummer Jeff Nokes says size isn't as important as being together and on the same page.

"It's not about how big your band is but it's about being there and being on it," Nokes said. "You have to be with it. You just can't go out and park and play. You have to be tight. That's part of what band camp provides. It's a strain physically. I'm sure if we measured it we march over four or five miles a day, easily, carrying an instrument, but that's what you do."

Band members spent the first week of camp working on fundamentals and teaching newcomers how to march.

"That first week was a lot of stopping and starting as we taught new people the basics," said senior Mary Harris, who will play two instruments (saxophone and trumpet) this year. "The second week was putting the music together and working on playing it to memory while getting the marching steps down. I actually think (Porter) has taken it easy on us this year because we are smaller in numbers."

Porter actually revived the band program when he was hired at CCHS four years ago and also is responsible for bringing back the marching band for high school football games, as well as other events, such as parades, benefits and fund-raisers.

"I had started programs before so I knew what was in store for me to an extent, but every community is different," Porter said. "That first year we had a good group. We would go up and down the hallways looking for people. We had a crash course in teaching and working on how to march and play. A lot of them had to learn how to play an instrument but they did a good job and they stuck with it."

Blackburn is the lone remaining member from Porter's first marching band. He has grown from a freshman to a leadership position as a senior. He's the drum major and plays two instruments - saxophone and trumpet.

"The band has improved each year and I have become a better player because of the band program," Blackburn said. "Mr. Porter has done a great job here and he does what he does very well. The band program is not just (at CCHS), it's in the grammar schools and it came forth because of (Porter)."

The general focus of band camp is to improve the members and fine-tune all aspects of marching band, but Porter says the initial relationships developed during this time also can pay dividends when school starts.

"Since we don't have a middle school it's difficult to know how many kids are coming up, and when they come from eighth grade to ninth grade there is a lot of transition," Porter said. "This helps with the social area of fitting in because we get started and they all already have one thing in common, which is music. They build friendships and camaraderie between each other and they are together two weeks before school starts so they already know people. It makes it easier for them to fit in and get started."

So when you hear the band playing in the stands or marching at halftime during high school football games, remember those students have worked and prepared hard to be at their best when the lights shine the brightest.