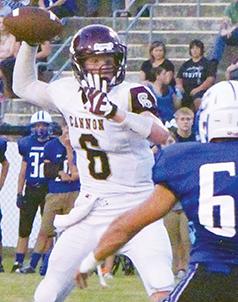 Quarterback Josh Walkup drops back for a pass in the face of pressure.

When TSSAA officials implemented the "mercy rule" they likely had games such as last Friday's between Livingston Academy and Cannon County in mind.

The rule calls for the game clock to run continuously as long as a team is ahead by 35 points in the second half. It stops only for timeouts and injuries.

It was going to be tough against Livingston Academy given the Wildcats' prowess as one of the top teams in the state; however, Cannon County only made things worse by giving them extra possessions. The Lions were guilty of five turnovers in the setback.

Quarterback Josh Walkup was 5-of-12 for 62 yards and four interceptions. Austin Brock also threw an interception on a trick play in the first quarter.

Cannon County was shut out for the second time this season.

Cannon County's defense was in a bind from the get-go. Of the 61 points allowed the Lions' defense was on the field for just 33. All 33 points followed Cannon County turnovers.

By halftime, Livingston Academy had secured four interceptions and scored on a kickoff return, punt return and interception return.

Billy Motlow and Anton Knox led the Lions with four tackles each. A.J. Daniel and Chip Parker had three tackles each.
The Lions will host Smith Co. for Senior Night Friday.