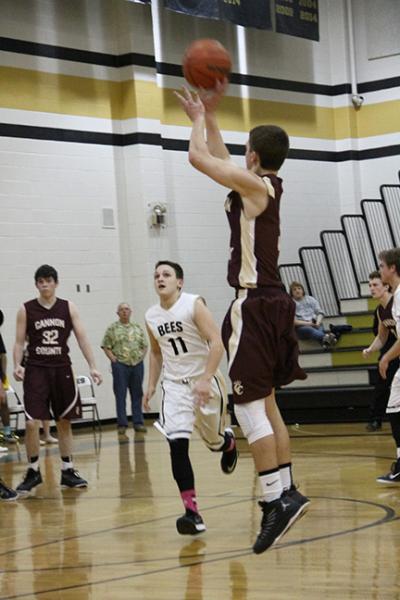 In the closing seconds of the opening half, Cannon County's Austin Martin forced a steal that resulted in a Marshall McReynolds layup, giving the Lions big momentum and a 29-28 advantage over York Institute heading into the half.
Four minutes of gameplay later, the end result was obvious after 21 unanswered points by the Lions in the third period giving Cannon County an 80-64 senior night win over district foe York Institute Tuesday.

"It wasn't my adjustments, so who else can you chalk it up to? I wholeheartedly think it was (the seniors)," head coach Matt Rigsby said.

York Institute would end the Lions' scoring spree after a Gareth Moody tip-in with 3:36 left in the third, ending a 6:03 scoreless drought that started back in the second period.

The Lions' only loss inside district play came in overtime to York Institute on Dec. 16 by the score of 70-67.
Behind 24 points and five steals, Josh Ruehlen led all scorers. Nave tallied 13 points.

"Most of my steals don't come off my defense," Ruehlen said. "Marshall, Garrett, and Jacob, they pressure the ball a lot and force people to throw passes that I can just break on."

"Effort, energy, and intensity goes a long way," Rigsby said. "Senior leadership definitely came into play."
"We have goals. I don't want to jinx us or anything, but we have goals and want to advance as far as we can," Ruehlen said of this year's 21-5 team.

Daniel, Nave, Ruehlen, Garrett McReynolds and Marshall McReynolds were recognized as this year's 2015 senior class before tipoff.
"It's a group that we're not done with yet," Rigsby said.

CC spoils Upperman's senior night
Holds onto District lead after close win
With only three games remaining on the regular season schedule before the District 8-AA tournament, head coach Matt Rigsby and his team understands that every opponent will give it their best shot in hopes of upsetting the first place Lions.

On Friday, Upperman and its senior night crowd gave Cannon County all it had to offer.
But Cannon County (22-5, 11-1) defended its District 8-AA lead with a 63-57 road win despite falling behind 9-0 in the games opening minutes.

The Lions have won nine straight games dating back to Jan. 3 at Warren County.

"Upperman had a really good game plan against us and shot it well," Rigsby said. "You can't take away everything we do."