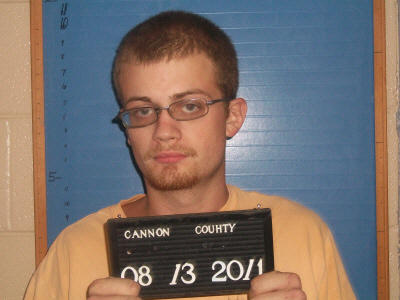 JENKINS
A high-speed chase ended recently with the driver getting one last smooch from his girlfriend before being carted off to the Cannon County Jail.

Deputy Travis Turney along with Sgt. Randy Neal were on patrol sitting stationary at the old Hollow Springs Road Market on Aug. 13 at around 1:30 p.m. when they observed a dark-colored Ford pickup occupied by two subjects turning right from Simpson Road onto Hollow Springs.

The deputies observed that the driver was not wearing a seatbelt. Deputy Turney pulled out onto the roadway to follow the vehicle to conduct a traffic stop.

As Deputy Turney began traveling on Hollow Springs Road, the driver began to increase the speed of the Ford pickup and it seemed as if he was trying to create distance between the truck and the deputy’s patrol unit.

Deputy Turney was able to move closer to the truck as it turned onto Rogers Road. At that point the deputy was able to visually identify the driver as Elisha Jenkins, who he knew had active warrants for his arrest. He was unable to identify the female passenger.

The truck’s speed greatly increased after it completed the turn onto Rogers Road. Deputy Turney clocked the vehicle using radar at 70 mph in a 45 mph zone. He activated his patrol unit’s emergency lights and siren and the truck began to travel faster, reaching speeds over 85 mph.

After notifying Sgt. Neal and Cannon County Dispatch that he was engaged in a pursuit, Deputy Turney observed the truck traveling at a high rate of speed approaching the stop sign at the intersection of Rogers Road and Jim Cummings Highway. Fearing an accident might occur, the deputy created distance between himself and Jenkin’s vehicle.

Jenkins then drove through the stop sign without stopping and made a sharp turn north onto Jim Cummings Hwy., where both lanes of oncoming traffic managed to avoid hitting his vehicle. It then reached pacing speeds of between 85 to 90 mph on Jim Cummings Hwy., at which point Deputy Turney observed Jenkins leaning over the seat and holding a white unidentified object close to his mouth and then tossing what appeared to be pieces of paper towels out the window and into the ditchline.

When the vehicle approached Martin’s Mini Barns, Jenkins abruptly stopped halfway into the gravel parking lot. He was then observed kissing the female passenger.

Deputy Turney stopped, exited his patrol unit, drew his service weapon and ordered both subjects to exit the truck with their hands where he could see them. The female passenger exited first with her hands raised. The deputy instructed her to place her hands on her head and lay face down on the ground and she complied.

Jenkins then exited from the driver’s side. Deputy Turney ordered him for a second time to lay face down on the ground with his hands on top of his head. The deputy observed Jenkins did not have his hands raised as instructed and he had a cigarette in his mouth so he began to move closer to Jenkins, holstered his weapon, and proceeded to place him in handcuffs.

At this point traffic was stopped in both directions on Jim Cummings Hwy. due to the pursuit. Deputy Turney removed Jenkins from the roadway and placed him in his patrol unit so traffic could resume moving.

Deputy Turney then asked the female passenger to stand up from her position on the ground and explained to her he was placing her in handcuffs for his safety until further investigation and that she was not arrest at this time.

Upon speaking with the female she was found to be Deana Ragan. She said she was Jenkins’ girlfriend. Ragan said she did not know what was going on and that she was scared.

After being transported to the jail, Jenkins, of 250 Marshall Creek Rd., Auburntown, was served arrest warrants charging him with felony evading arrest, reckless driving, criminal littering and violation of probation. He was also issued citations for speeding, misuse of registration, failure to obey a traffic control device, and violations of the seatbelt, insurance and registration laws.

Jenkins was appointed the public defender to represent him in court on Tuesday, Aug. 16. His next court appearance is Aug. 30. His bond was set at $9,500.

While not charged in this incident, Ragan, of 907 Reed Court, Woodbury, was cited the next day by Deputy Turney after he spotted her driving on Simpson Road in a vehicle whose tag was registered to another vehicle. She was also cited for violations of the financial responsibility and registration laws.