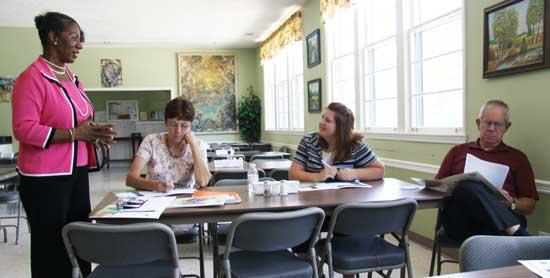 Census Bureau Team Leader Gertrude Parham, left, talks about local returns with, from left, Cannon County Chamber of Commerce services coordinator Carolyn Motley, Senior Center director Connie Rigsby and Woodbury Mayor Harold Patrick Monday.
Results from the 2010 Census won't be released until early next year, but it is already known that Cannon Countians did better than most places in the nation in participating in the head count.

Gertrude Parham, Tennessee Team Leader with the U.S. Census Bureau's Charlotte (N.C.) Region, announced during a meeting Monday at the Cannon County Senior Center that mail returns of Census forms from Cannon County increased significantly when compared to the 2000 Census.

Cannon County had an average mail return rate of 70.3 percent in 2000. That number jumped to 77.6 percent this year.

The national average for 2010 mail-back returns is 72 percent, Parham said.

Cannon County is divided into three tracts for the purpose of Census counting. Tract 960100 represents the northern part of the county, 960200 the central portion and 960300 the southern portion.

By law, the U.S. Census Bureau must deliver the results of the 2010 count to the president by the last day of this year. The president has until March 20, 2011 to release them to the governor of each state, at which time they are announced to the public.

Census information affects the numbers of seats each state occupies in the U.S. House of Representatives. And people from many walks of life use census data to advocate for causes, rescue disaster victims, prevent diseases, research markets, locate pools of skilled workers and more.

When one does the math, it's easy to see what an accurate count of residents can do for your community. Better infrastructure. More services. A brighter tomorrow for everyone. In fact, the information the census collects helps to determine how more than $400 billion dollars of federal funding each year is spent on infrastructure and services like:

Census data directly affect how more than $300 billion per year in federal and state funding is allocated to communities for neighborhood improvements, public health, education, transportation and much more. That's more than $3 trillion over a 10-year period.